US to fortify Niger base

The US military is planning to significantly improve the defences at its compounds inside Niger’s Air Base 101 in Niamey, two solicitations released via the US government’s System of Award Management website on 9 September revealed. 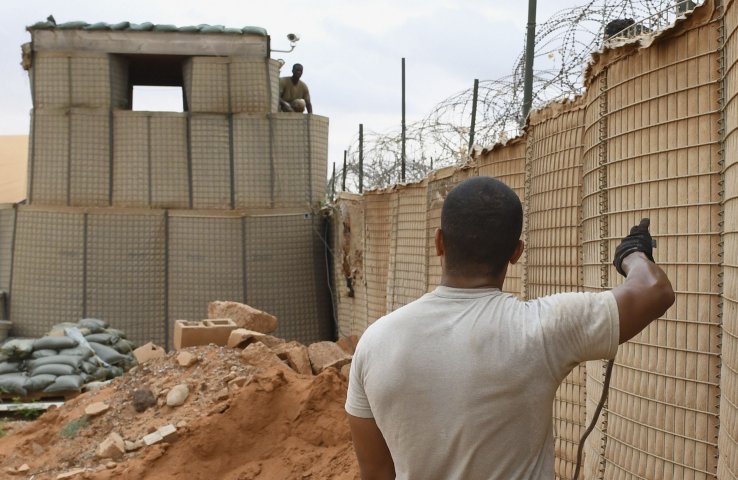 One of the solicitations outlined a plan to upgrade the defences around the 768 th Expeditionary Air Base Squadron’s (768 EABS) operations area, which has three clamshell aircraft shelters, the other covered the unit’s exercise relief facility (ERF) 900 m to the west. The contractors that are awarded the contracts will have to complete the work at the operations area in 120 days and the ERF in 180 days.

The plans posted with the solicitations showed the existing walls and Hesco barriers surrounding the operations area will be removed and replaced with 4 m high ‘Alaska’ barriers made of reinforced concrete and topped with concertina wire. New gates will be installed to allow aircraft to move from the hangars to the runway.

The ERF will be similarly fortified, with wire-topped Alaska barriers installed to reinforce the Hescos that currently make up the compound’s northern and eastern walls. Alaska barriers will also replace the brick wall and Hescos along the south and west sides.

New entry control points will also be constructed at both compounds.

The US military is planning to significantly improve the defences at its compounds inside Niger’s Ai...

The United States has handed over a new hangar to the Nigerien Air Force at Air Base 201 in Agadez, ...

France has pledged to deploy 220 more troops to help suppress the Islamist insurgency in the Sahel, ...

AFCENT command moves from Qatar to US to increase resilience

In a proof-of-concept exercise carried out on 28 September, personnel at Shaw Air Force Base in Sout...