US to build new storage sites in Saudi Arabia

The US military appears to be moving forwards with a plan to develop overland supply routes to the Gulf by establishing new storage sites in western Saudi Arabia. 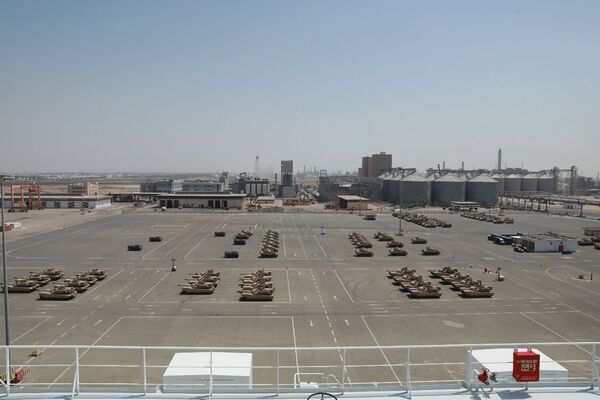 US Army vehicles that were unloaded at Yanbu's industrial port for onward shipment to Kuwait to test the Trans-Arabian Network during Logistics Exercise 21 in April. (US Army, 310th Expeditionary Sustainment Command)

The US Army Corps of Engineers released two market research notices in early August looking for contractors that can develop sites at or adjacent to unnamed Saudi bases in the vicinity of Jeddah and Al-Taif. The five sites at the Al-Taif base and three sites at the Jeddah base will have a total area of nearly 2 km 2 .

The contractors will have to clear and level the sites, provide proper drainage, cover them in gravel to support containerised storage or similar equipment, build access roads, and install security fencing.

The largest military facility in Jeddah is the King Faisal Naval Base, the home of the kingdom's Red Sea fleet, and King Fahd Air Base is close to Al-Taif.

US Central Command (CENTCOM) said in January that it was evaluating King Fahd Air Base, King Faisal Air Base in Tabuk, and the port city of Yanbu as contingency logistics hubs that would enable it to supply and reinforce its forces without relying on the vulnerable sea route through the Strait of Hormuz or airbases that are within range of Iranian missiles. Other unidentified sites were said to be under evaluation.

The US military appears to be moving forwards with a plan to develop overland supply routes to the G...

The People's Liberation Army Navy (PLAN) and the Russian Navy are carrying out a co-ordinated anti-s...

The Pakistan Army's (PA's) Air Defence forces have inducted into service a variant of the Chinese-ma...
Request Consultation