The US Department of State has approved a potential USD39 million Foreign Military Sale (FMS) of two MK 15 MOD 25 Phalanx close-in weapon systems (CIWSs) for fitment onto the first of a second batch of three Sejong Daewang (KDX III)-class guided-missile destroyers for the Republic of Korea Navy (RoKN). 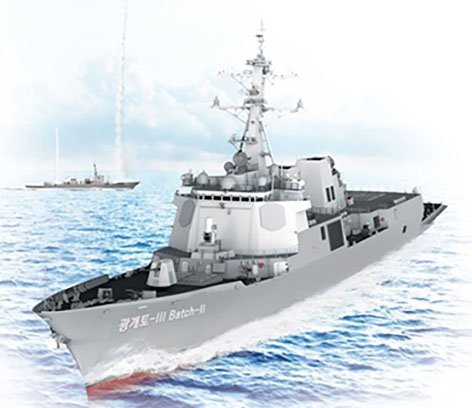 An artist’s impression of the first ship of the second batch of KDX III-class guided-missile destroyers for the RoKN. (HHI)

The US Defense Security Cooperation Agency (DSCA) announced on 1 December that the South Korean government had requested to buy two Phalanx Block 1B Baseline 2 (IB2) systems along with 4,000 20 mm armour-piercing incendiary (API) rounds.

Also included in the proposed deal, which still needs to be approved by the US Congress, are spare parts, other support equipment, ammunition, books and other publications, software, training, engineering technical assistance and other technical assistance, and other related elements of programme and logistical support.

The agency said the potential sale is aimed at improving South Korea’s capability to “meet current and future threats”, adding that the first KDX III (also spelled KDX 3) Batch II destroyer will use these systems “to provide it with effective means of detecting and defending itself against incoming airborne threats”.

The principal contractor will be Raytheon Missile and Defense in Louisville, Kentucky. There are no known offset agreements proposed in connection with this potential sale, according to the DSCA.

The latest developments come after South Korean shipbuilder Hyundai Heavy Industries (HHI) announced in October 2019 that it had secured a KRW676.6 billion (USD613 million) contract for the “detailed design” and construction of the first KDX III Batch II vessel.

The US Department of State has approved a potential USD39 million Foreign Military Sale (FMS) of two...

Responding to a recent mandate by US lawmakers, the US Navy (USN) is working now to develop and inte...