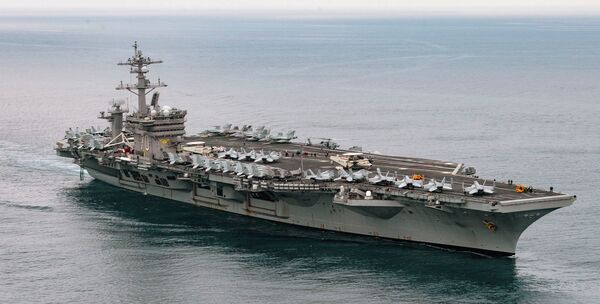 A small number of F-35Cs can be seen on the flight deck of USS Carl Vinson as it departs San Diego, although a number may have been located below deck. (US Navy)

“[USS] Vinson is the first carrier to accommodate a mix of 4th and 5th generation strike fighters, providing unprecedented lethality and survivability and ensuring the [US] Navy team can operate and win in contested battlespace now and well into the future,” Captain Tommy Locke, commander CVW 2, was quoted as saying.

While the USN did not disclose the number of F-35Cs embarked aboard Carl Vinson , imagery of the ship departing San Diego in California showed just four such aircraft on a flight deck that featured 24 Boeing F/A-18E/F Super Hornet and EA-18G Growler aircraft and other types. However, it is not known how many further F-35Cs may have been below deck at the time the photographs were taken.

Having been designed specifically for US Navy carrier operations, the F-35C differs from its conventional take-off and landing (CTOL) F-35A and short take-off and vertical landing (STOVL) F-35B stablemates in that it features a larger wing area for reduced landing speeds and greater fuel capacity, folding wing tips for easier parking and stowage, beefed-up undercarriage to accommodate the extreme sink-rates of carrier landings, as well as a catapult launch-bar on the nosegear and a rugged arrestor hook for recovery.