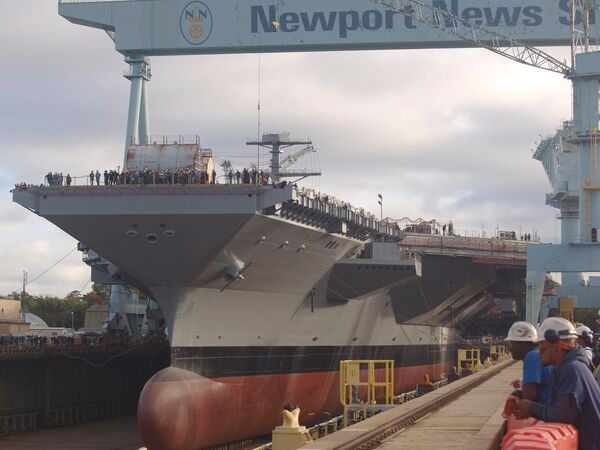 The US Navy (USN) has awarded the Newport News Shipbuilding unit of Huntington Ingalls Industries (HII) about USD90.5 million through two contract modifications “to definitise” the incorporation of the aircraft carrier USS John F Kennedy (CVN 79) warfare system, the Pentagon confirmed on 20 January.

Naval Sea Systems Command (NAVSEA) awarded Newport News Shipbuilding one USD77.9 million fixed-price incentive (firm target) modification and another USD12.5 million cost-plus-fixed-fee and cost-plus-incentive-fee modification for the work, which helps to transition the ship to a single-phase delivery model from the dual-phased delivery arrangement initially planned for the carrier.

The work is expected to be completed by June 2024, according to the contract announcement.

Under the initial dual-phase delivery plan, the shipyard would have delivered most of the ship, including core ship systems, in one phase, and then delivered the combat system and related equipment later in the second phase.

The move was meant to save time and money for overall construction. USN carrier officials wanted to avoid ripping combat system equipment out of the carrier that had been installed earlier during construction and would be outdated by the time the ship was commissioned. Navy officials estimated the service could save up to USD1 billion in overall carrier construction costs.

USN officials later determined it would be best to shift to a single-phase delivery – in part to better accommodate additional modifications mandated by Congress for F-35 Joint Strike Fighter capabilities.