The Afghan Ministry of Defense (MoD) announced on 24 February that the Logistics Command of the Afghan National Army (ANA) has received 640 new vehicles from the United States.

The MoD said via Twitter that the delivery includes 403 High Mobility Multipurpose Wheeled Vehicles (HMMWVs or Humvees), 43 Ford Ranger pick-up trucks, 23 ambulances, and 170 motorcycles, adding that the vehicles are meant for use by regional ANA corps. 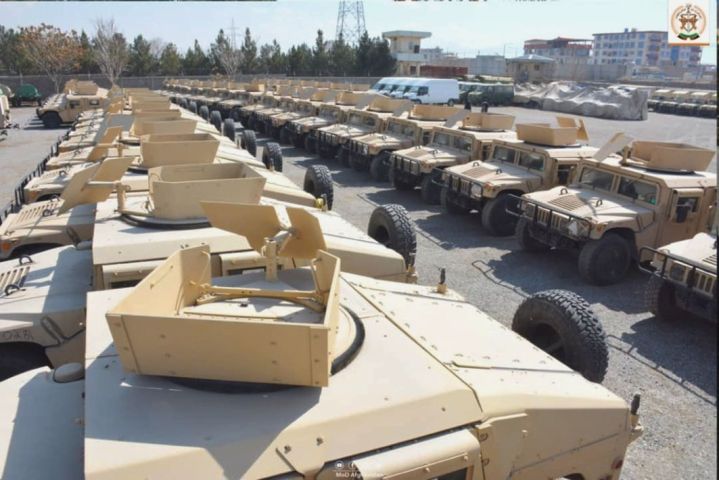 The Afghan MoD announced on 24 February that it received 640 new vehicles from the US for use by the ANA, including 403 Humvees. (Afghan MoD)

It noted that the move is expected to increase both the capacity and capabilities of the ANA, with Abdullah Raqibi, deputy defence minister for technology and logistics, emphasising that “these vehicles and equipment will be used effectively to maintain security”. No further details were provided.

The latest developments come as Afghanistan has seen a surge in the number civilians killed and injured since the start of peace negotiations between Kabul and the Taliban in September 2020, according to a 23 February UN report.

“The overall number of civilian casualties in 2020 of 8,820 (3,035 killed and 5,785 inured) fell below 10,000 for the first time since 2013. … While the reduced numbers are welcome, documentation shows that the lower levels of overall harm were partially offset by increases from certain tactics, as well as from an uncharacteristic increase in civilian harm in the last quarter of the year,” said the UN Assistance Mission in Afghanistan (UNAMA) in its latest annual report on the protection of civilians in armed conflict.

The Afghan Ministry of Defense (MoD) announced on 24 February that the Logistics Command of the Afgh...