US commits to ‘asymmetric defence strategy' for Taiwan 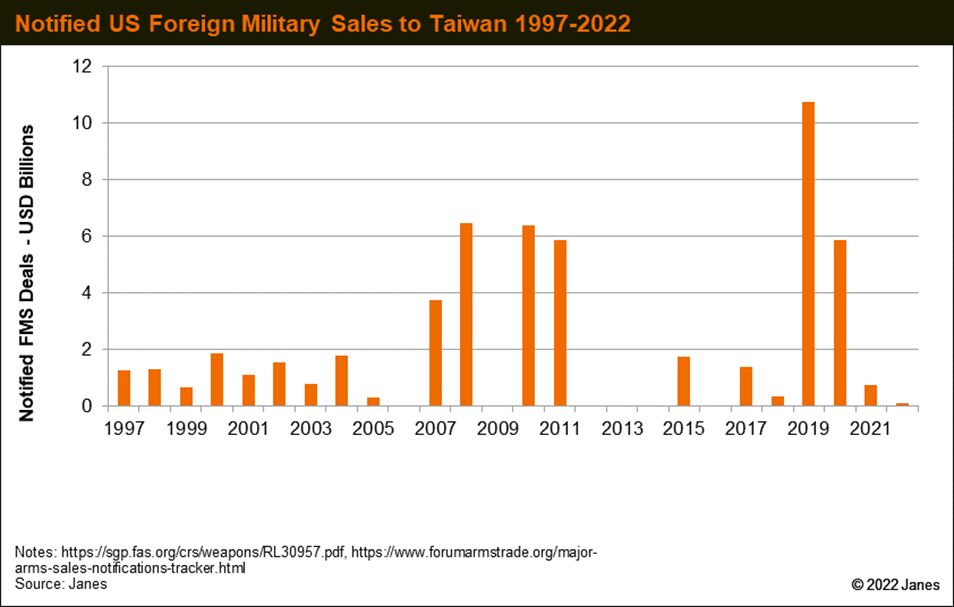 The value of notifications of US Foreign Military Sales to Taiwan between 2017 and 2022 is about USD18 billion, with the majority of the deals announced in 2019 and 2020. (Janes)

The US will continue to promote an ‘asymmetric defence strategy‘ when considering military sales to Taiwan in light of the island‘s rising cross-strait tensions with China, a spokesperson from the US State Department told Janes on 18 May.

The spokesperson was speaking the same day that the US-Taiwan Business Council (USTBC) criticised the US government for “no longer supporting arms sales programmes for Taiwan outside [the US] definition of ‘asymmetric' defence”.

According to the USTBC, the change in US sales policy is demonstrated by the US government's recent cancellation of military sales that do not meet its ‘asymmetric defence' criteria.

“Continuing to pursue systems that will not meaningfully contribute to an effective defence strategy is inconsistent with the evolving security threat that Taiwan faces,” the spokesperson said.

He added, “Our defence relationship with Taiwan remains based on an assessment of Taiwan's defence needs and the threat posed by the People's Republic of China.”

Citing US military and government officials, the spokesperson also provided an outline of a definition of ‘asymmetric' according to which the US government is considering military sales.

“Bolstering Taiwan's self-defence is an urgent task, and the most effective approach to doing so is through investing in asymmetric capabilities that are credible, resilient, mobile, distributed, and cost-effective,” said the spokesperson.

The US will continue to promote an ‘asymmetric defence strategy‘ when considering military sales to ...