The United States is building a new combined joint operations centre (CJOC) at Hatzor Air Base in Israel, according to a notice released by the US government System for Award Management website on 11 July. 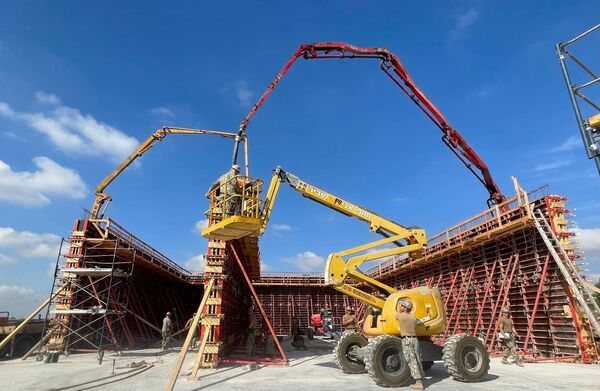 The notice from US Air Forces in Europe and Air forces Africa sought a contractor to install a roofing system on the 700 m 2 single-storey CJOC building that it said was under construction.

It did not say who would use the CJOC, but combined facilities are normally used by more than one country, indicating it would be shared by US and Israeli personnel.

US Central Command, which now covers Israel, did not respond when asked to comment on the development.

The notice included architectural drawings showing the building is being constructed at a location at the northern tip of Hatzor Air Base. The telecommunications plan showed it will have desks for 152 people and two meeting rooms.

Open source satellite imagery shows the four neighbouring buildings to the east were built between 2014 and 2019. The plans identified these as two office blocks and two dormitories and showed additional buildings, including another dormitory, have since been built to the south.

The US Naval Mobile Construction Battalion 11 released photographs on 15 June showing one of its detachments pouring the concrete walls for a building at Hatzor Air Base.

The United States is building a new combined joint operations centre (CJOC) at Hatzor Air Base in Is...