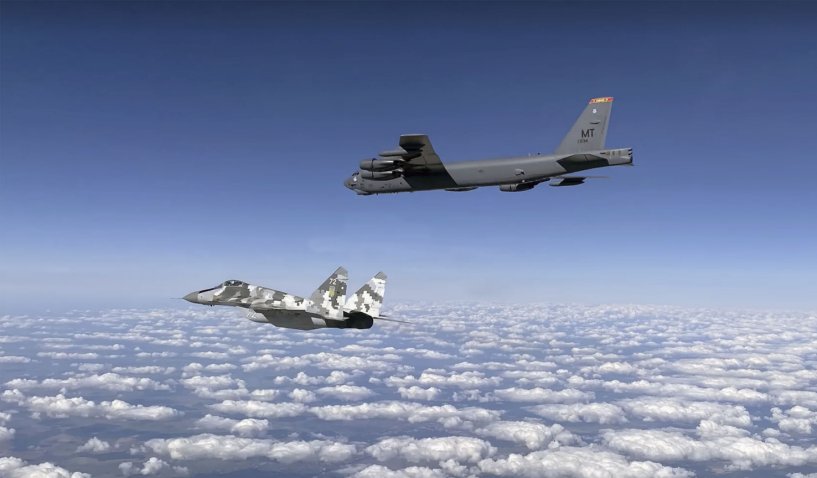 A USAF B-52 escorted by a Ukrainian Air Force MiG-29 over Ukraine on 4 September. (Ukranian MoD)

The formation of three B-52Hs flew to the far eastern edge of Ukraine and conducted a race track patrol along the coast of the Sea of Azov for several hours on 4 September before returning to their forward operating base at RAF Fairford in the United Kingdom, according to open-source tracking of their transponders.

They were joined for part of the mission by a pair of RAF Typhoons flying from RAF Akrotiri on Cyprus and two Ukrainian Air Force MiG-29 and two Su-27 fighters. Open-source tracking also detected a RAF Airbus Voyager tanker aircraft supporting the mission by refuelling the Typhoons over the Black Sea as they headed towards Odesa. The Pentagon released a video on 4 September of the mission showing a NATO E-3A airborne warning and control system (AWACS) flying in formation with the US bombers before they were joined by the Ukrainian fighters.

Throughout the mission, RAF Sentinel R1 and RC-135 Rivet Joint surveillance aircraft were tracked patrolling off the coast of Crimea, along with a USAF RC-135, according to transponder data.

In response to the aerial foray, the Russian state news agency TASS reported on 4 September that the Southern Military District scrambled four Su-27 and four Su-30 fighter jets to intercept the US bombers. No incidents were reported by either the US or Russian governments.