US Army seeks to compete as OMFV prime, industry unnerved

Industry is concerned about a potential US Army plan to bid on, judge, and select its own M2 Bradley Fighting Vehicle replacement, and is likening such a measure to a metaphorical self-licking ice cream cone.

During the past few weeks, defence companies have been eagerly awaiting the release of a draft request for proposal (RFP) for the army’s latest attempt to design and field an Optionally Manned Fighting Vehicle (OMFV). Although they were interested in learning more about what the army is seeking this time around, they were also keen to see if a provision was included that enabled the service’s Ground Vehicle Systems Center (GVSC) to also compete as a prime contractor. As several sources suspected, the draft RFP publicly released on 17 July included such provision.

“Potential offerors are notified that a US government entity may submit a proposal as a prime offeror,” the army wrote.

Ashley John, the public affairs director for the army’s Program Executive Office for Ground Combat Systems, confirmed to Janes on 19 July that the service is exploring options to “leverage its core competencies and compete with industry in the design of a future combat vehicle”. More specifically, she said that the service wanted to use its science and technology community and engineers to “potentially develop” a Bradley replacement vehicle. 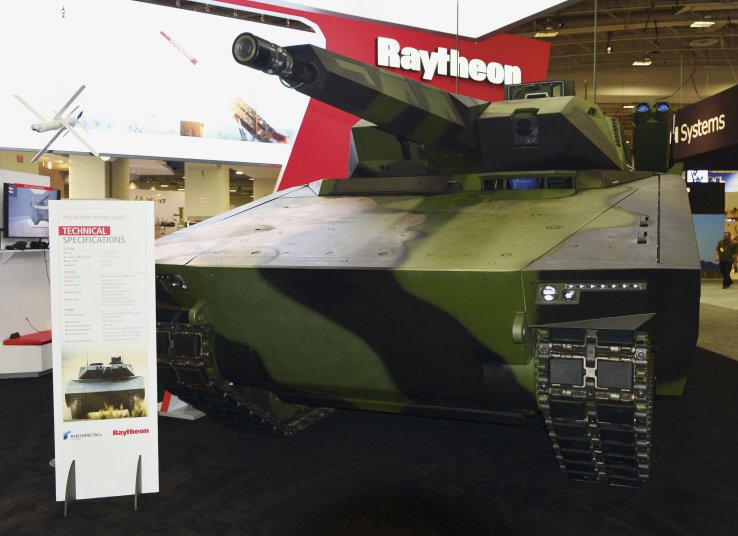 Raytheon and Rheinmetall showcase the Lynx IFV at AUSA 2018 in Washington, DC. In May, the team told Janes that it planned to modify the vehicle prototype for the US Army’s new OMFV competition. (Janes/Patrick Allen)

As a result, interested vendors now have a flurry of questions over the ethics and legality of such a measure. One industry source that closely collaborates with the service and GVSC told Janes

Industry is concerned about a potential US Army plan to bid on, judge, and select its own M2 Bradley...