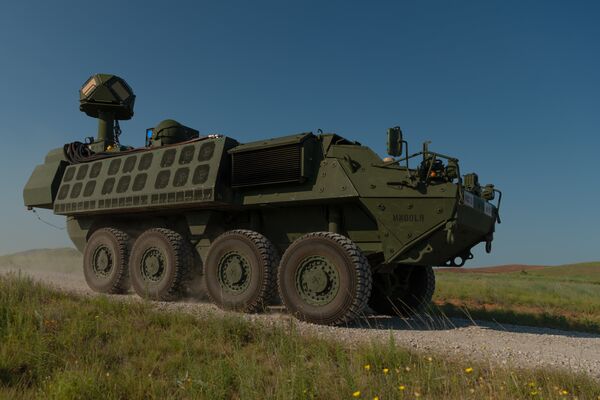 A US Army DE M-SHORAD prototype. The service plans to host an upcoming round of prototype testing to further refine the design before providing soldiers with an initial version in September 2022. (US Army)

The US Army will continue testing Stryker vehicles integrated with 50 kW-class lasers in anticipation of sending the weapon to the first unit in September, according to a service leader.

Lieutenant General Neil Thurgood, the army's director of hypersonics, directed energy, space, and rapid acquisition, participated in a Center for Strategic and International Studies event on 12 January and fielded questions about a range of development capabilities including the Directed Energy Manoeuvre-Short Range Air Defense (DE M-SHORAD) programme, which is now dubbed the Guardian. Service officials announced last year that a Raytheon-backed team had been tasked with progressing the development effort after a Northrop Grumman prototype was forced out because of technical challenges. Kord Technologies is the programme's prime contractor and was overseeing both teams.

Before finalising the decision to proceed with the Raytheon prototype, the service hosted a “shoot-off” in which the weapon shot 450 “engagements” to counter class I, II, and III aerial drones and “some” rockets artillery and mortar (RAM) threats, the general said.

“Think about that, 450 sets and reps for our soldiers to practise killing things,” Lt Gen Thurgood added. “We go back to White Sands [Missile Range in New Mexico] this month to finish with the broader rockets, artillery, and mortar [threat set].”

He noted that this upcoming test round will run through to early February and will use a weapon system that includes design changes made since the mid-2021 test.

The US Army will continue testing Stryker vehicles integrated with 50 kW-class lasers in anticipatio...