US Army soldiers are evaluating the latest iteration of Microsoft’s modified HoloLens 2 headset as part of the service’s effort to inject augmented reality (AR) into how the force trains and conducts combat missions.

Under the Integrated Visual Augmentation System (IVAS) programme, the service is working with Microsoft to militarise the company’s HoloLens 2 AR system to include One World Terrain and Nett Warrior, with the goal of beginning to field the capability to the force by the end of 2021. To get there, soldiers are testing out the second iteration of the technology at Fort Pickett, Virginia, and providing the service and company with advice on ways to improve it.

Jane’s joined senior army and Pentagon leaders – including Army Vice Chief of Staff General Joseph Martin and senior official performing the duties of Under Secretary of the Army James McPherson – at Fort Pickett on 6 November for a technology demonstration. During the event, service leaders strapped on the head-up display (HUD) and associated vest while Microsoft employees controlled the technology settings during mock combat and training missions. 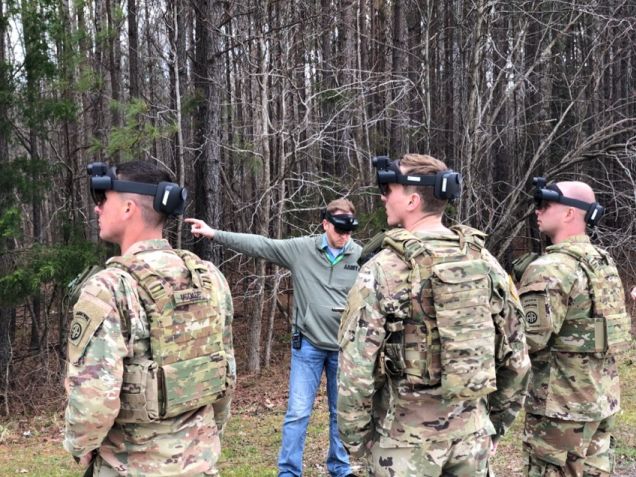 US Army soldiers using their IVAS HUD, based on the Microsoft HoloLens, during a previous test event. (US Army)

Once outfitted with the technology, service leaders headed through the woods and into a building on a mission to test out the IVAS HUD’s ability to recognise and register faces, pull up maps, and translate foreign characters. Leaders also demoed the integration of the Family of Weapon Sights – Individual (FWS-I) – a thermal sensor mounted on M4 Carbine and M249 Squad Automatic Weapon that provides users with infrared imagery in all weather and lightning conditions – into the IVAS HUD when they faced ‘enemy combatants’.

US Army soldiers are evaluating the latest iteration of Microsoft’s modified HoloLens 2 headset as p...

US Special Operations Command (USSOCOM) is monitoring emerging technologies and weapons under develo...