The US Army and Boeing have flown an NCH-47D Chinook heavy-lift helicopter fitted with the more powerful General Electric (GE) T408 engines of the Sikorsky CH-53K King Stallion, it was announced on 21 September. 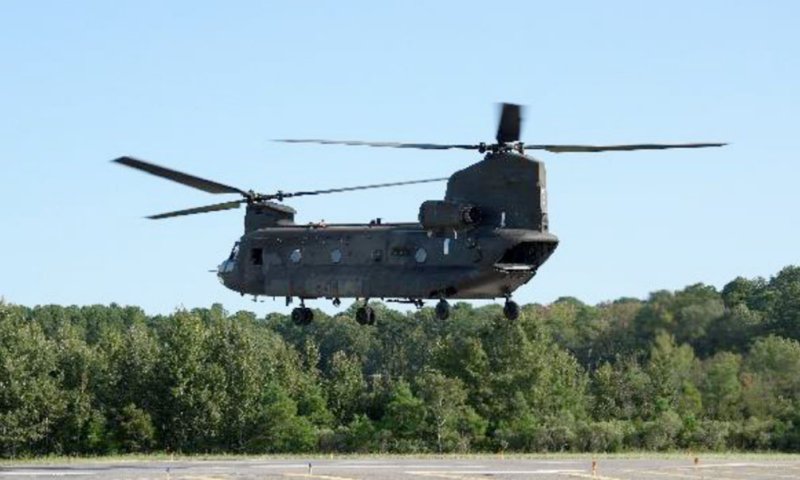 The first flight of the T408-equipped NCH-47D testbed involved a hover and pedal turn, with further flights and test points to follow through to the end of the year. (US Army Combat Capabilities Development Command Aviation and Missile Center )

As noted by the US Army Combat Capabilities Development Command Aviation and Missile Center (CCDC AvMC) that is overseeing the development effort, this first flight at Fort Eustis in Virginia involved the NCH-47D fitted with the General Electric T408 engine performing a hover and pedal turn in order to assess multiple critical aircraft parameters supported by live telemetry.

“This first flight is the culmination of a five-year effort under a co-operative research and development agreement between AvMC, Boeing and GE Aviation to evaluate the feasibility and benefits of higher-power engines while assessing and reducing the technical risks of integrating advanced engines in a Chinook aircraft,” the army said.

The standard Honeywell T55 engine that currently powers the Chinook puts out 5,000 shp for a combined 10,000 shp per helicopter. With the GE T408 fitted, the Chinook generates a combined 15,000 shp. As previously reported by Janes, swapping out the engines has involved some major structural changes to the supporting mounts given the larger size of the new powerplant. Boeing has also noted that because the T55 spins in the opposite direction to the T408, a new gearbox has needed to be fitted.

The US Army and Boeing have flown an NCH-47D Chinook heavy-lift helicopter fitted with the more powe...