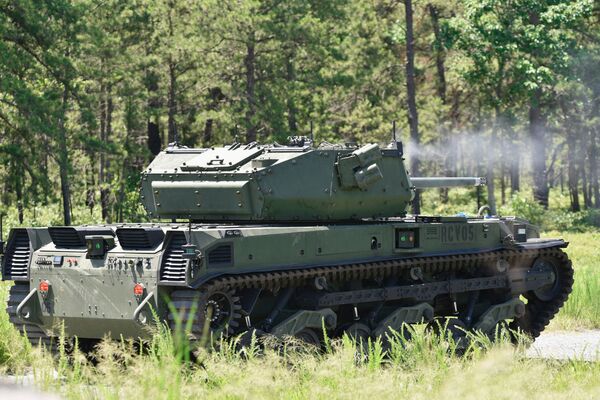 An RCV-M prototype fires a round at a target during the vehicle's live-fire testing at Fort Dix, New Jersey, in June 2021. The service has decided it will postpone development of this larger robot, and instead focus on developing the RCV-L. (US Army)

US Army soldiers will not be operating a Robotic Combat Vehicle-Medium (RCV-M) fleet any time soon after service leaders decided to postpone such a future programme to first focus on developing a fleet of smaller unmanned vehicles, according to Doug Bush, the service's assistant secretary for acquisition, logistics, and technology.

The service selected QinetiQ North America and Pratt Miller (now acquired by Oshkosh Defense) to build four RCV-Light (RCV-L) prototypes in early 2020, and a Textron Systems, Howe & Howe Technologies, and FLIR Systems team to build four RCV-M prototypes. Once the service received the vehicles it embarked on a testing series designed to lead up to a soldier experiment between June and August 2022.

However, the army has already decided it will move forward with RCV-L development, and an associated ‘full and open' competition, while also planning to develop a larger fleet.

“We changed our acquisition strategy to prioritize RCV-L and a programme running inside of it that is software based to get at the autonomy,” Bush told Janes during a 4 May interview. “RCV-M has, effectively, been deferred for now.”

Bush said the service could change its mind on RCV-M in the coming years as it learns more from RCV-L development and noted that there may be an opportunity to pursue science and technology type experimentation with the larger platform.

US Army soldiers will not be operating a Robotic Combat Vehicle-Medium (RCV-M) fleet any time soon a...