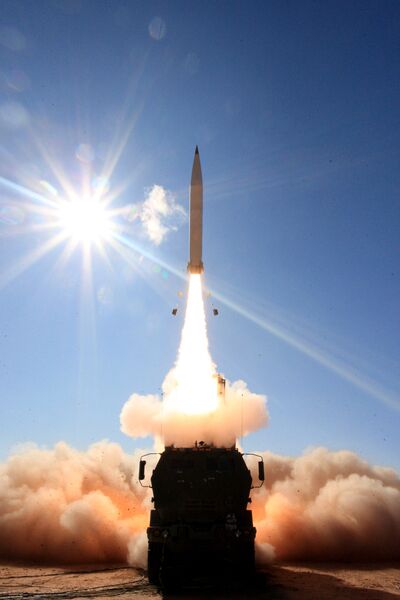 Photo from the inaugural flight of Lockheed Martin's PrSM prototype in December 2019. (US Army)

Advancements in designing and testing a potential ramjet for the US Army Precision Strike Missile (PrSM) could extend the weapon's range up to 1,000 kilometers, and a prototype could be ready for testing in 2026, according to Major General John Rafferty, head of the service's Long-Range Precision Fires Cross-Functional Team, and budget documents.

Lockheed Martin's PrSM is set to replace the MGM-140 Army Tactical Missile System (ATACMS) and the army is preparing to deliver an initial version of the weapon (with Northrop Grumman's rocket motor) to soldiers in fiscal year 2023. Although the service has not disclosed the range of this missile, Army Chief of Staff General James McConville told lawmakers on 12 May that it will exceed 500 km.

At the same time, the army is working on future PrSM iterations including an increment 2 version that could be ready for fielding in 2027 that will include a multimode seeker for striking maritime targets. Looking further into the future, programme officials want to add in new payloads and extend the PrSM's range with a ramjet – an airbreathing jet engine that uses the forward motion of the engine to produce thrust.

Although these alternative payloads are currently at a “low” technology readiness level, in December 2021 the service conducted a “breakthrough” test that has “really changed our thinking, long-term, on PrSM,” Maj Gen Rafferty told Janes during a 12 May interview.

“It was a static firing of the ramjet engine,” the two-star general explained.

Advancements in designing and testing a potential ramjet for the US Army Precision Strike Missile (P...