US Army-funded researchers have developed a new lightweight, resilient material with potential uses in armour, protective coatings, and space systems.

The research focused on nano-architectured materials and ultralight structures that are formed using precisely patterned nanoscale trusses, which are engineered architectures that are imparted to a material. It was conducted at the US Army's Institute for Soldier Nanotechnologies (ISN) at the Massachusetts Institute of Technology, along with researchers from Caltech and ETH Zürich. 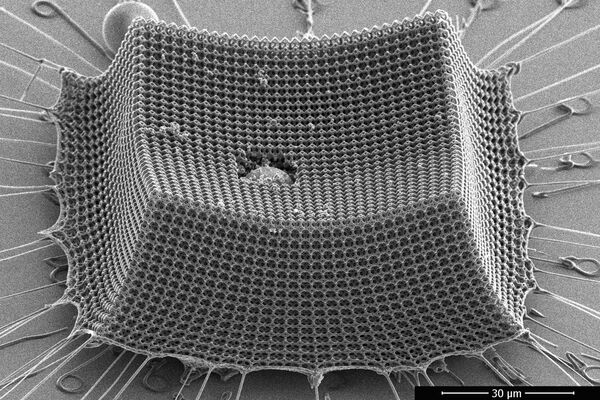 ARL has funded research on nanoarchitectured materials, which could provide benefits in lightness and resilience. (ISN at MIT)

The researchers fabricated a repeating pattern called a tetrakaidecahedron, which is a lattice configuration composed of microscopic struts, through the use of two-photon lithography. This process uses a high-powered laser to solidify microscopic structures in photosensitive resin, which was then cured into a carbon structure.

The team then used an ISN-developed laser-induced particle impact array to launch microparticles at the material at supersonic speed. They found that the individual nano-architected struts impacted by the particle had crumpled and compacted, but that the surrounding struts remained intact.

The research, which was first published in Nature Materials, focused on two different densities of nanoarchitected material, with the denser variant proving more resilient. Overall, the same amount of mass of the material provides more protection than other materials, including steel, according to the researchers.

US Army-funded researchers have developed a new lightweight, resilient material with potential uses ...