US approves SM-6 sale to Japan 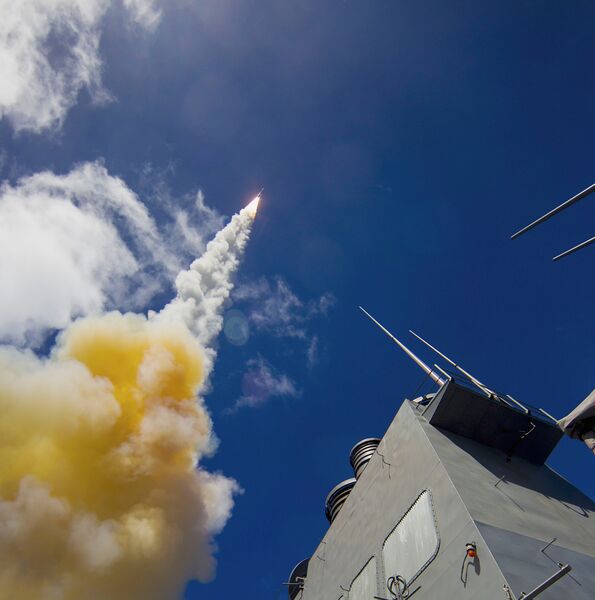 An SM-6 Block I missile arcs skywards following launch from a US Navy DDG-51 guided-missile destroyer. Japan plans to integrate the missile-defence system onto its Atago-class destroyers. (US Navy)

The US Department of State has approved a request by Japan to procure Standard Missile 6 (SM-6) air-defence missiles for an estimated USD450 million, the US Defense Security Cooperation Agency (DSCA) has announced.

It said on 20 October that the proposed Foreign Military Sales (FMS), which requires approval from the Congress, includes 32 SM-6 Block I missiles across two tranches of 16, MK41 vertical launch system (VLS) canisters, and a range of related equipment and services.

The DSCA said that the proposed sale, for which Raytheon Missiles & Defense will be the principal contractor, will “improve Japan's air defence and ballistic missile defence capabilities against potential adversaries in the region”.

“It will also provide the US-Japan security alliance with the latest and most advanced capabilities, reducing Japan's reliance on US forces for the defence of Japan and further improving US-Japan military interoperability,” it added.

Japan was cited by Raytheon as a potential customer of the missile in 2017 alongside Australia and South Korea. Navies in all three countries plan to upgrade their surface combatants with the Baseline 9 Aegis combat system required for SM-6 operations.

In September 2018 the Ministry of Defense (MoD) in Tokyo confirmed its plan to equip the Japan Maritime Self-Defense Force's (JMSDF's) two improved Atago-class destroyers with the SM-6.

The Republic of Korea (RoK) Navy plans to integrate the SM-6 missiles onto its KDX-III destroyers, with budget expected to be allocated between 2023 and 2031. The state department also approved in August 2021 a request from Australia to procure the SM-6 Block 1.

The US Department of State has approved a request by Japan to procure Standard Missile 6 (SM-6) air-...