US Secretary of State Mike Pompeo and Polish Minister of National Defence Mariusz Błaszczak signed an Enhanced Defense Cooperation Agreement (EDCA) between their two countries in Warsaw on 15 August. 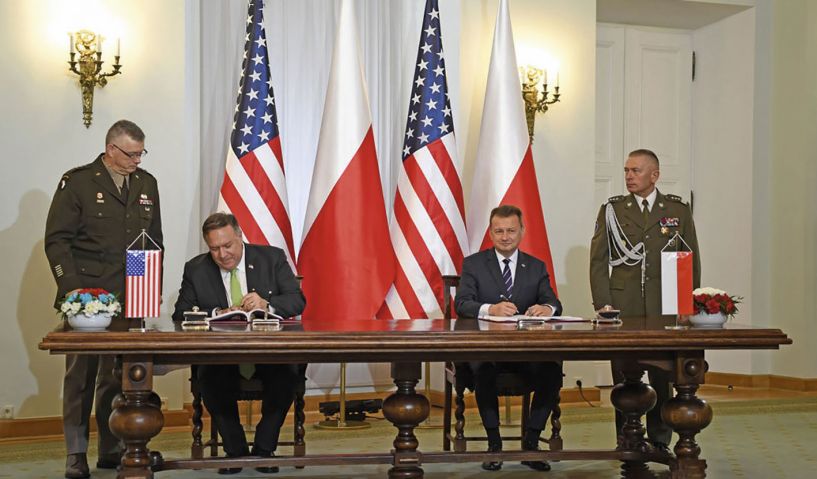 US President Donald Trump and his Polish counterpart, Andrzej Duda, agreed most of the provisions of the agreement in 2019. In addition, the US presence in Poland will be increased from 4,500 to 5,500 troops and infrastructure will be built to accommodate up to 20,000 US soldiers. Poland will cover some of the costs, such as those for infrastructure and logistics, that are estimated at PLN500 million (USD136 million) a year. The infrastructure covered does not include the US Aegis Ashore ballistic missile defence site in Redzikowo.

The EDCA provides the legal framework for US military and civilian personnel to be deployed to Poland, including families and private contractors. It supplements the 1951 NATO Status of Forces Agreement (SOFA), according to a 15 August US State Department fact sheet on the agreement.

The EDCA lists the facilities that US troops will use in Poland. Poznań will accommodate a command and control (C2) facility that will probably be used by the V Corps Foreward Headquarters. An armoured brigade combat team will be located in Żagań Toruń and Skwierzyń, where new infrastructure will be provided. Special forces will be located in Lubliniec, where an operational base will be established to accommodate a company.

US Secretary of State Mike Pompeo and Polish Minister of National Defence Mariusz Błaszczak signed a...

The United States and Poland have reached an Enhanced Defense Cooperation Agreement (EDCA), the US D...