The US Air Force (USAF) has inked a technology demonstration and maturation deal with Kymeta, to stand up advanced connectivity capability in support of the service's Advanced Battle Management System (ABMS) effort.

The USD950 million indefinite delivery/indefinite quantity (ID/IQ) contract will cover “maturation, demonstration, and proliferation of capability across platforms and domains, leveraging open systems design, modern software, and algorithm development” to enable ABMS technologies, according to a company statement. Those ABMS technologies will eventually feed into the air service's contribution to the Pentagon's Joint All-Domain Command and Control (JADC2) capability.

Along with the air force's ABMS, the Integrated Tactical Network (ITN) under development by the US Army will provide ground domain network connectivity and capability in support of JADC2. The US Navy leaders are working on a new wide, artificial intelligence (AI)-enabled network architecture, dubbed Project Overmatch, to accelerate distributed maritime operations via increased teaming of manned and unmanned platforms. 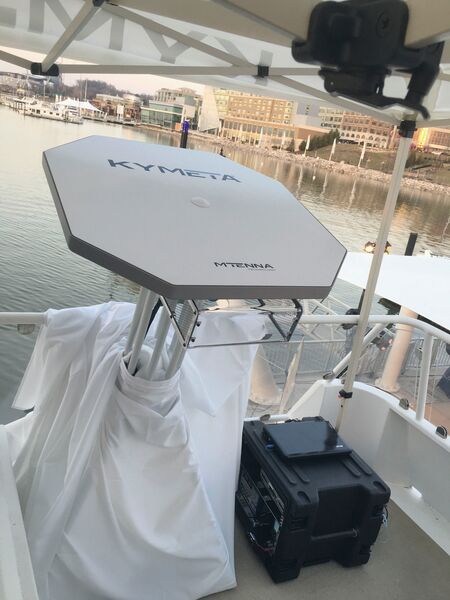 Kymeta showed its commercial maritime system at the Satellite 2016 conference in Washington, DC. Similar systems are in use by the US in military applications. (Anika Torruella)

The ID/IQ contract issued to Kymeta was as part of the “competitive category for connectivity [development]” for ABMS that will cover “an open architecture family of systems that enables capabilities via multiple integrated platforms”, in support of ABMS and the larger JADC2 concept, company officials said in the statement. “We are confident in our ability to provide connectivity solutions to US Department of Defense organisations through JADC2” as well as the ABMS programme, Rob Weitendorf, Kymeta's vice president for business development, added.

The US Air Force (USAF) has inked a technology demonstration and maturation deal with Kymeta, to sta...