The US Air Force (USAF) has delayed its expected Milestone C decision for the Boeing T-7A Red Hawk jet trainer because of technical issues, and is requesting less money for the programme in fiscal year (FY) 2022 than previously anticipated. 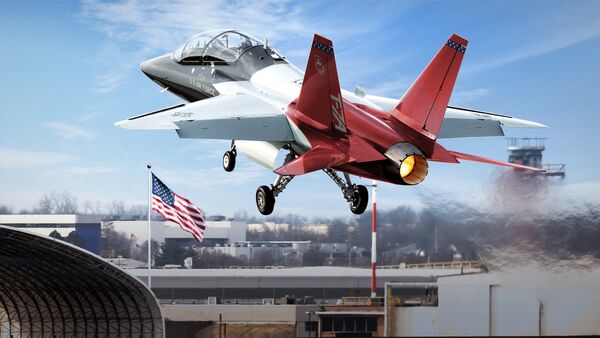 An undated photo of the USAF Boeing T-7A Red Hawk jet trainer. The USAF is delaying its Milestone C decision for the programme because of parts shortages, initial design delays, and additional testing required due to discovery of aircraft wing rock. (Boeing)

The review for whether the T-7A programme should enter low-rate initial production (LRIP) from engineering and manufacturing development (EMD) is scheduled for July–September 2023, according to the service's FY 2022 budget request. The USAF, in its FY 2021 budget proposal, expected Milestone C to take place in April–June 2022. USAF spokesman Captain Jacob Bailey said on 17 June that the most recent Milestone C estimate had it planned for October–November 2022.

Capt Bailey said on 16 June that the Milestone C delay was caused by parts shortages and initial design delays, and additional testing was required because of the discovery of aircraft wing rock.

According to Capt Bailey, wing rock is a phenomenon that often occurs on aircraft with swept wings. At high angles of attack, one of the wings may begin to stall, resulting in the aircraft rolling slightly to that side.

When the stalled wing goes down, it stops stalling. However, the opposite wing begins to stall, making the aircraft roll to the other side. The process repeats, causing the aircraft to rock back and forth.

The T-7A programme has inherent schedule risk because of the aggressive nature of the programme's schedule, Capt Bailey said.

The US Air Force (USAF) has delayed its expected Milestone C decision for the Boeing T-7A Red Hawk j...