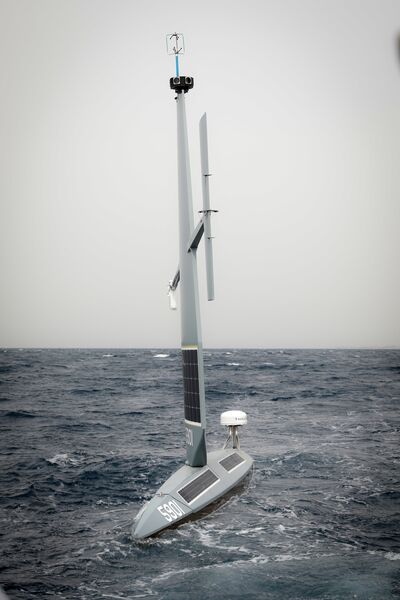 One of the Saildrone Explorer USVs Task Force 59 is testing in the Gulf of Aqaba. (US Naval Forces Central Command/US 5th Fleet)

The US Navy's 5th Fleet is testing a Saildrone Explorer unmanned surface vessel (USV) at Jordan's Aqaba Naval Base.

The 5th Fleet announced on 13 December that its Task Force 59 began testing the USV for the first time on the previous day.

“These are exciting times for Task Force 59 as we team with the Royal Jordanian Navy to establish our hub for Red Sea operations in Aqaba and deploy some of our new maritime robotics,” said Captain Michael Brasseur, the commander of the task force, which was established in September to lead the 5th Fleet's integration of unmanned systems and artificial intelligence.

The fleet announced on 18 November that Colonel Hisham Khaleel Aljarrah, the commander of the Jordanian Naval Force, had visited its main base in Bahrain, where he was briefed on the Saildrone Explorer. It said that Aqaba would become the hub for the new USV's operations in December.