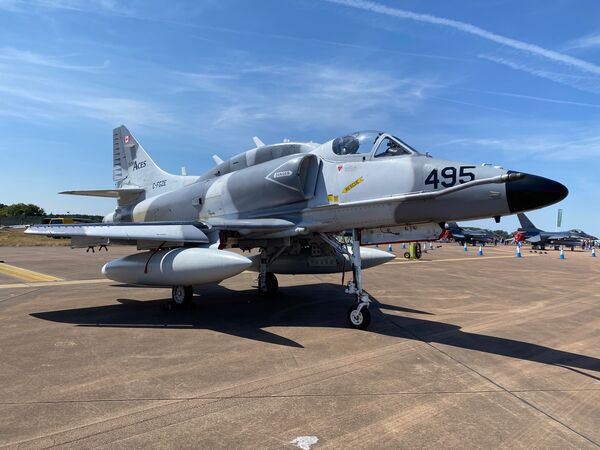 Top Aces A-4N Skyhawk at Royal International Air Tattoo 2022. The aircraft is used in a variety of roles, including to replicate fifth-generation aircraft when fitted with the company's Advanced Aggressor Mission System (AAMS) and an active electronically scanned array radar. (Top Aces)

“The US has always led the field when it comes to the use of aggressor aircraft and many European nations have held a more conservative view about the benefits of this type of training,” said David Bradshaw, a former Royal Air Force (RAF) air commodore, who has joined the company as director of business development – Europe, adding “One major exception has been Germany with its SFZD [Schnelle Flugzieldarstellung] programme.”

“We have had the SFZD adversary air training services contract with the German Air Force since 2015 and this was renewed on 1 January 2022,” Bradshaw added. “We support this contract from Wittmund [air base] using our A-4N aircraft that have been fitted with our Advanced Aggressor Mission System (AAMS) and an active electronically scanned array (AESA) radar that allows the aircraft to simulate fifth-generation threats.”

Top Aces has identified at least two potential requirements as future business opportunities in Europe. In the UK, the cancellation of the Air Support to Defence Operational Training (ASDOT) requirement in March 2019 caused the UK Ministry of Defence to reassess its ADAIR/CAS needs and this has led to the Interim Red Air Aggressor Training Service (IRAATS) that was won by Draken Europe in April this year.