Photographs of what appeared to be a Boxer wheeled armoured vehicle at a production facility in Algeria have added credence to claims that the type is being assembled in the North African country. 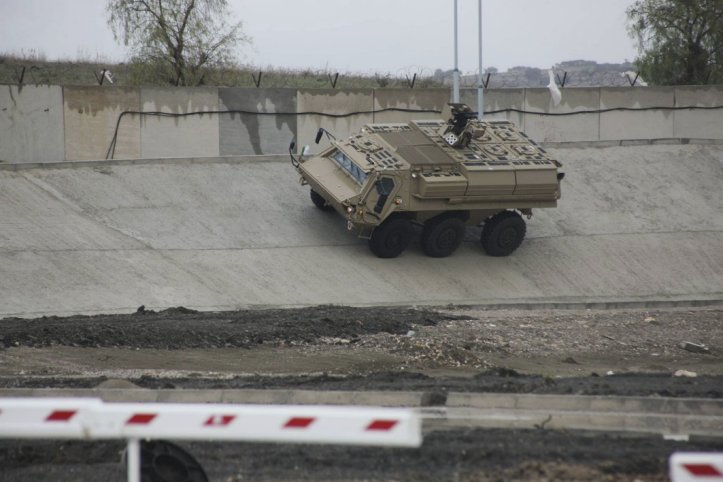 A Fuchs 2 armoured personnel carrier is seen on the test track at the Rheinmetall-Algerie facility when it was formally inaugurated by General Ahmed Gaïd Salah in February 2017. (Algerian Ministry of National Defence)

The photographs released via Twitter on 7 October showed a Boxer on a trailer at a location that appeared to be the test area at the Rheinmetall-Algerie facility near Aïn Smara where the German company’s Fuchs 2 armoured personnel carrier is assembled for the Algerian military. A Fuchs 2 could be seen in the background of one of the photographs.

The Boxer had a Lance turret and was painted in the same tan colour used on the Fuchs 2s assembled at the facility and other types of Algerian military vehicles.

A Boxer with a Lance turret and painted in German camouflage was previously seen in Algeria when Chief of Staff General Ahmed Gaïd Salah visited the Central Logistics Base (BLC) in Blida in January 2018, fuelling speculation that Algeria was evaluating the type.

Unlike the vehicle seen at the BLC, the Boxer in the photographs had an additional remote weapon station for a machine gun mounted on top of the commander’s panoramic sighting system on its Lance turret: a feature that Rheinmetall says gives it a ‘hunter/hunter’ capability that enables both the gunner and commander to independently engage targets.

Photographs of what appeared to be a Boxer wheeled armoured vehicle at a production facility in Alge...