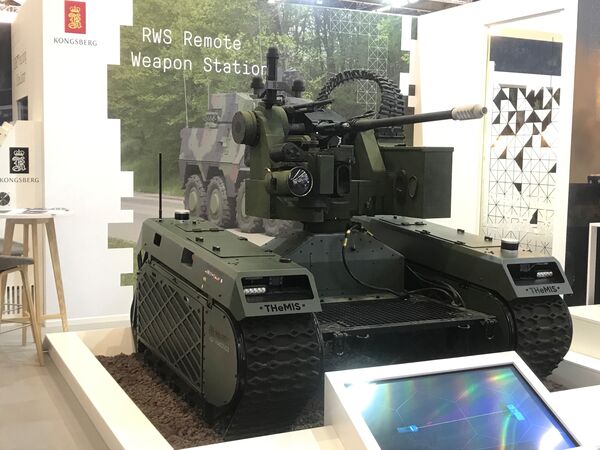 Janes has observed two new payloads on Milrem's THeMIS medium unmanned ground vehicle (UGV) believed to have been exhibited for the first time at Eurosatory 2022.

At the Kongsberg pavilion, the THeMIS was exhibited with an integrated RS6 Protector remote weapon station (RWS) and a Metravib PILAR gunshot detector system. Norway's Kongsberg first revealed the RS6 Protector in 2021, and it is equipped with a 30 mm cannon and a 7.62 co-axial machine gun.

A number of Kongsberg RWSs are known to have been integrated onto the THeMIS UGV over the past several years – including the RS4, which was tested on a THeMIS in live-fire demonstrations held in Slovenia on 8 June – but this is the first time an RS6 has been sighted integrated onto a THeMIS.

Asked whether the company was expecting to carry out tests with the system, a Kongsberg representative said, “We don't have a specific plan, but I would not say no because for us it doesn't matter what kind of weapon station we put on this UGV because we have a generic interface.”

In addition, a THeMIS was observed at the pavilion of French firm CNIM Systèmes Industriels configured with the company's Route Clearance Unmanned System (ROCUS). It is understood to be the first time the system has been publicly exhibited.

ROCUS is primarily an anti-explosive ordnance system equipped with a robotic arm and scoop, and designed to inspect and destroy improvised explosive devices (IEDs). The robotic arm has a 100 kg lift capacity at 4 m.