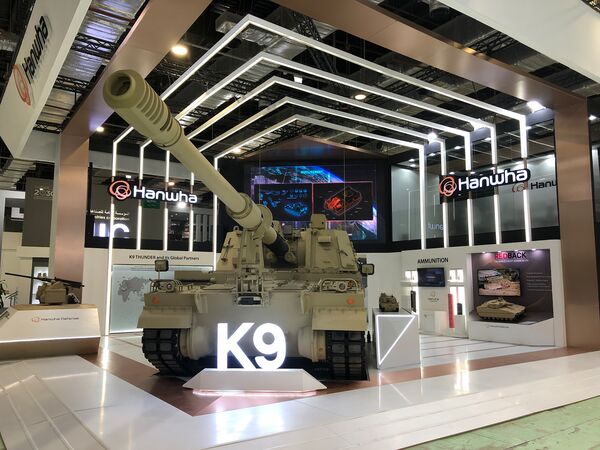 A K9 Thunder on display at the EDEX show held in Cairo in November 2021. (Hanwha Defense)

South Korea's official Yonhap news agency earlier cited the country's Defense Acquisition Program Administration (DAPA) as saying that an Egyptian K9 agreement worth more than KRW2 trillion (USD1.65 billion) had been finalised, without saying how many howitzers would be delivered.

The Egyptian statement said the howitzers would be jointly produced by South Korea's Hanwha Defense and companies affiliated with Egypt's Ministry of Military Production (MOMP) and referred to them as the K9A1 EGY variant.

Hanwha Defense displayed a K9 at the International Defense and Military Industries Expo (EDEX) held in Cairo in November 2021, which was labelled as a K9EGY variant as well as a model of a K10EGY ammunition resupply vehicle. The Egyptian military confirmed during the show that it was considering acquiring the K9, while Yonhap reported that the howitzers would be produced locally in Egypt.

The deal was not finalised during President Moon Jae-In's visit to Egypt in January, as expected. The South Korean premier held a press conference with Egypt's President Abdel Fatteh el-Sisi on 20 January in which he said they had “agreed to work together to conclude the contract”.

Egypt has signed a contract with South Korea covering the joint manufacturing of 155 mm K9 self-prop...