The Australian Army has taken delivery of the first two of four new Boeing CH-47F Chinook transport helicopters, just 10 weeks after their sale was approved by the US Department of State.

The AUD595 million (USD441.6 million) investment in the new helicopters will increase the army's fleet of heavy-lift CH-47Fs to 14, said Defence Minister Peter Dutton in an 8 July statement.

The first two aircraft, drawn from US Army stock, were delivered to the Townsville-based 5th Aviation Regiment on 7 July by a US Air Force C-5M Galaxy transport, according to the Australian Department of Defence (DoD).

The third and fourth helicopters are scheduled for delivery in mid-2022, according to the DoD, which quoted Dutton as saying that the additional aircraft “will strengthen [the] army's airlift capability into the future and increase the ADF's [Australian Defence Force's] ability to support operations globally”. 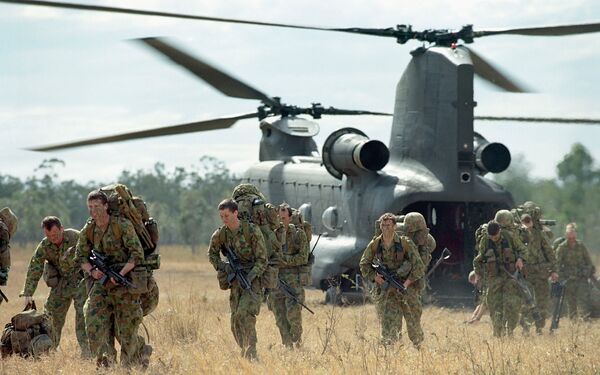 Soldiers from the 1st Battalion, Royal Australian Regiment, disembarking from a CH-47F Chinook attached to the 5th Aviation Regiment. Canberra announced on 8 July that it has received the first two of four recently ordered CH-47Fs for the army. (Commonwealth of Australia)

The DoD added that Australia's defence industry will continue to play “a key role in supporting the increased Chinook fleet”, with an additional AUD69.5 million investment into the Australian economy over the next 20 years.

This article, first published 8 July 2021, has been updated with new imagery.