Beyond consumer and commercial life, rapid developments in automation are also transforming warfare. However, while unmanned and autonomous capabilities have proliferated in the air domain, land systems have not been so quick to adopt such new technologies. In a report first published to Janes subscribers in December 2020, Scott Alexander reports...

Over the past two decades nearly 100 countries, as well as non-state actors, have developed or acquired unmanned aerial vehicle (UAV) capabilities. However, although UAV technology has advanced rapidly since 2000, land and sea systems have largely not kept pace. That said, some unmanned programmes for land and sea platforms are now gaining momentum. For example, in the maritime domain the Sea Hunter anti-submarine warfare (ASW) unmanned surface vehicle (USV), a 132 ft (40 m) trimaran self-piloting vessel for submarine tracking, is undergoing trials for the US Navy. Meanwhile, large commercial long-range heavy-lift cargo UAVs are being developed and autonomous unmanned ground vehicles (UGVs) such as self-driving cars will enable road travel with no human interaction other than pressing ‘go’.

The financial benefits of unmanned capabilities are considerable, particularly where operations put human life at risk. For instance, quite beyond the price of human loss, losing the pilot of an F-35A Joint Strike Fighter would cost more than USD10 million in terms of the training investment made over five years alone. Moreover, the death of a single operator could be so costly in political capital that it could compromise military campaigns, destroy re-election bids, and disgrace administrations.

A fully autonomous system could eradicate almost all these costs. Moreover, with the advent of other revolutionary technologies that enable complex processing tasks to be conducted off-system through cloud computing, if autonomy were to be taken to its logical conclusion in eradicating the ‘human in the loop’, the ultimate cost of war could be measured in scrap metal instead of human lives.

One reason that the technology for automated land platforms is behind those in the air and naval domains is that, due to the complex operating environment faced by land systems, there is simply nothing better than a human operator. For example, tasks such as unexpectedly reacting to a hole in the road ahead, or knowing we need to handle an object with care even before we touch it because it looks fragile, require immense processing power if a human’s natural perceptive capabilities are to be substituted.

Autonomously mirroring these physical tasks is akin to artificially matching innate human behaviour. To achieve more complex capabilities for autonomous land systems, programmers must match human abilities such as being able to recognise a familiar figure in the distance, determining minute facial queues, or even unquantifiable abilities such as having a ‘sixth sense’ for danger.

This, along with the operational requirements of recent theatres, largely explains the spending disparity between UAVs and UGVs within US military budgets. Indeed, in 2019 the US military spent more than USD6 billion on UAV programmes compared with USD429 million on procuring UGVs. Moreover, UGV efforts have consistently comprised less than 5% of US unmanned budgets during the past decade simply because moving a platform over land autonomously is hard to achieve.

Already subscribed? Log in to read the full report

Interested in more from Janes? See what we do 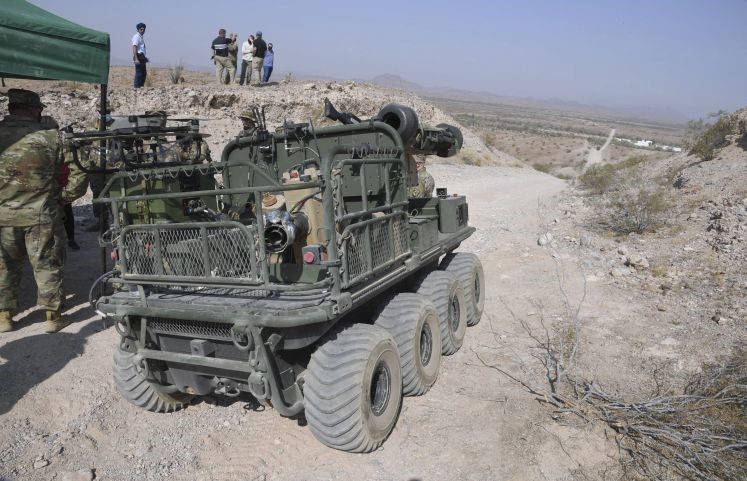 The Multi-Utility Tactical Transport (MUTT) is a rugged 8×8 all-terrain UGV capable of following a dismounted soldier carrying a wireless tether. The system is designed for carrying heavy gear or wounded soldiers, but can also be used as a mobile firing platform equipped with a Javelin anti-tank missile, machine gun or M4 rifle. (US Army)

While unmanned and autonomous capabilities have proliferated in the air domain, land systems have no...