Ukrainian Navy: A force in distress 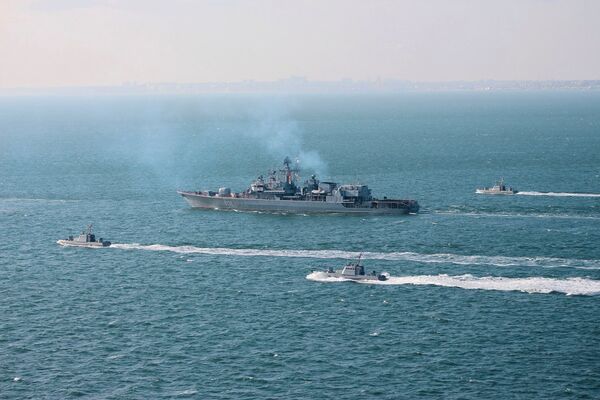 The ongoing tensions between Russia, Ukraine, and NATO countries with regards to the increasing Russian Armed Forces buildup along the Ukrainian borders are an extension of the eight-year-long conflict that began with the Russian annexation of Crimea in 2014. With the loss of Crimea and control over the Kerch Strait, Ukraine has become dependent on Russia for its access to the Black Sea from the Sea of Azov. The loss has not only shrunk the country's maritime boundaries, but also restricted the freedom of navigation of its commercial vessels, making its maritime trade dependent on Russian actions. The current virtual naval blockade of Ukraine as a result of the ongoing Russian naval exercises in the Black Sea is a testimony to the vulnerability of Ukraine's maritime access.

In a bid to counter Russian attempts to unilaterally dominate the region in the future, Ukraine has embarked on a recapitalisation effort to rebuild its naval capabilities to better defend its territorial waters and protect other maritime interests. To achieve its objectives, Ukraine requires a strong navy that can enforce sea control and project deterrence to avoid further attempts by Russia to encroach on its sovereignty. Having lost a considerable number of its assets at Sevastopol in Crimea in 2014, however, and in the face of ongoing funding and resource constraints, the Ukrainian Navy's modernisation efforts remain a challenging task.

The annexation of Crimea in 2014 dealt a major blow to the capabilities of the Ukrainian Navy, which lost its primary base in Sevastopol, 12 of its 17 major surface combatants, most of its naval aviation assets, as well as its main repair, maintenance, training, and depot facilities, which all fell under the control Russian forces.

Since 2014, the fleet has been bolstered by seven locally built Project 58155 Gurza-M inshore patrol craft, which entered service from 2016. Ukraine is planning to induct a total of 20 Gurza-M-class inshore patrol craft, with an additional unit scheduled to join the fleet in 2022. Ukraine has also recently taken delivery of four ex-United States Coast Guard (USCG) Island-class cutters, two in 2019 and two in 2021.

Modernisation strategy and challenges in acquisitions

Ukraine adopted a three-phase strategy in 2018–19, called ‘Strategy of the Naval Forces of the Armed Forces of Ukraine 2035', which aimed to neutralise the impact of existing maritime challenges and threats. The first phase of the strategy, to be completed by 2024, emphasises the procurement of assets to secure its coastal infrastructure and to enforce sea denial and sea control up to 40 n miles from the coast. The second phase, to be completed by 2030, expands these capabilities to cover the exclusive economic zones (EEZs), ie., up to 200 n miles from the coastline. The focus of the third phase is to further expand capabilities acquired in the initial phases, and to generate capabilities to also protect Ukrainian interests in international waters beyond the Black Sea. In September 2021 Ukrainian President Volodymyr Zelenskyy put into effect the National Security and Defence Council of Ukraine's recommendations on ‘The development of the Naval Forces of the Armed Forces of Ukraine until 2031'; however, the details of the decree have not been made public yet.

However, the country's local shipyards are facing significant funding and technology obsolescence issues that have impacted Ukraine's ongoing indigenous shipbuilding programmes. Four locally built Project 58250-class corvettes were originally planned to join the fleet by 2016–17, with construction of the first vessel, Volodymyr Velyki, beginning in 2011 at Chernomorsky shipyard in Nikolayev. However, the project was halted in 2014 owing to funding issues. There have been significant efforts to rejuvenate the programme since 2018, but the shipyard was declared bankrupt in June 2021. A decision made in 2020 to acquire MILGEM Ada-class corvettes from Turkey has raised further questions regarding the future of the Project 58250 programme.

The fate of the Project 58503 Kentavr-LK-class assault craft programme under way at Kuznya na Rybalskomu shipyard also remains uncertain, following allegations of corruption against the shipyard as well as the government officials involved with the project. The first two of three boats under construction, Stanislav and Malin, werelaunched in 2018 and are yet to join the fleet.

The annexation of Crimea also resulted in the loss of three major shipyards, which dealt a further blow to Ukraine's shipbuilding industry. Located in Crimea, at the shores of the Black Sea, Zaliv Shipyard is equipped with a dry dock and has the capability to construct vessels that are more than 300 m long and 50 m wide, with a launch weight of up to 50,000 tonnes. Russia has not only resumed activity at the shipyard but is also continuously upgrading it. Zaliv Shipyard is fulfilling major Russian state orders for two 30,000-tonne Project 23900-class Universal Landing Ships and multiple high-profile projects.

Ukraine is largely dependent on support from the US and its NATO allies to rebuild and modernise its fleet. The US, under an Excess Defence Article (EDA) arrangement, has transferred four ex-USCG cutters and one more is expected to join the fleet in 2022. In addition, a total of 16 SAFE Boats International MK VI patrol craft (with 10 already contracted) are scheduled to be built and delivered under a Foreign Military Sales (FMS) arrangement starting from 2022.

In December 2020 Ukraine's Ministry of Defence (MoD) signed an agreement with Turkey's Presidency of Defence Industries (SSB) for the procurement of an unspecified number of MILGEM Ada-class corvettes. As of late 2021, construction of the first-in-class was progressing at RMK Marine shipyard in Istanbul.

Ukraine is also to receive two ex-United Kingdom Sandown-class minehunters in 2022 as part of a framework agreement signed between the two countries in November 2021, which also envisages the construction of eight missile boats and a frigate. The missile boats are likely to be a modified version of the 50 m-long P50U Protector-class boats, to be built by Babcock.

The Ukrainian Navy faces a multitude of challenges from Russia as it enforces its expanded maritime borders in the Black Sea and the Sea of Azov, and the sheer number of Russia's Black Sea Fleet ships is a reminder of the scale of the threat and the vulnerability Ukraine faces. Although the Black Sea Fleet is one of the smaller fleets in the Russian Navy in comparison with the Northern and Pacific fleets, it has seen major investment and modernisation since 2010 and has been playing a more active role since the March 2014 annexation of Crimea and in support of Russian operations in Syria. In addition, Russia has demonstrated its potential of swiftly deploying its assets from Northern and Baltic fleets to the Black Sea.

Along with its older ships and submarines, the Black Sea Fleet boasts major new platforms including the addition of three Admiral Grigorovich-class frigates, six Project 636.3-class (modified Kilo) submarines, four Project 21631 Buyan-M-class corvettes, and three Project 12700 Alexandrit-class minesweepers. Project 22800 Karakurt-class and Project 20386-class corvettes are also expected to join the fleet from 2022. Along with the modified Kilo class submarines, all these new frigates and corvettes are equipped with long-range anti-ship/land-attack Kalibr cruise missiles, and a few are also expected to be fitted with Tsirkon 3M-22 hypersonic missiles in future.

Since the beginning of the recent escalation, Russia has been progressively increasing its maritime presence close to the Ukrainian coast.

In January the Russian MoD announced several simultaneous naval exercises to be conducted around Europe throughout February, which involve more than 140 warships and support vessels, more than 60 aircraft, and 10,000 personnel. Separate exercises have been planned in the Mediterranean Sea, North Sea, Sea of Okhotsk, northeastern part of the Atlantic Ocean, and the Pacific Ocean, which have seen Russian warships transiting from their base ports to various parts of Europe. On 26 January more than 20 ships participated in one of the exercises in the Black Sea. The Slava-class cruiser Varyag from the Pacific Fleet also entered the Mediterranean Sea in February, possibly to participate in one of the exercises.

On 8 February the Russian MoD announced that six landing ships from the Northern and Baltic fleets had begun their passage into the Black Sea through the Bosphorus to participate in one of the exercises. The landing ships included the Project 11711 Ivan Gren-class ship Pyotr Morgunov and fiveProject 775/775M Ropucha-class large landing ships. On 8 February Russia issued notices restricting movements in the multiple regions in the Black Sea as well as the Sea of Azov citing naval exercises from 13 to 19 February. However, on 10 February the exercise as well as the notice for the Sea of Azov were cancelled. The notice issued for the exercise in Black Sea, which involves more than 30 Russian ships, continues to restrict Ukraine's access to the Black Sea, its freedom of navigation, and the movement of commercial vessels in the area. Although Russian and Ukrainian officials, including their heads of states, have denied the threat of an invasion, the presence of multiple landing ships along with a submarine and the unilateral restrictions placed on the freedom of navigation in the Black Sea will only serve to further fuel tensions and raise concerns of a potential conflict.

In response to the recent Russian Armed Forces buildup, several NATO allies have announced deployments across Europe to enhance the defence and deterrence of its member states. In January, Denmark sent its Iver Huitfeldt-class frigate Peter Willemoes to the Baltic Sea to join the alliance's Standing NATO Maritime Group One (SNMG1) and four F-16 fighter jets to Lithuania in support of NATO's long-standing air-policing mission in the region. Meanwhile, in December 2021 US Secretary of Defense Lloyd Austin ordered the Harry S Truman Carrier Strike Group (CSG) to remain in the Mediterranean Sea for an unspecified duration, delaying its scheduled transit to the US Central Command.

While all the troop deployments and the maritime exercises are intended to boost the defence and deterrence of the alliance, neither NATO countries nor the US have specifically pledged their military involvement in case of a probable conflict.

The ongoing tensions between Russia, Ukraine, and NATO countries with regards to the increasing Russ...