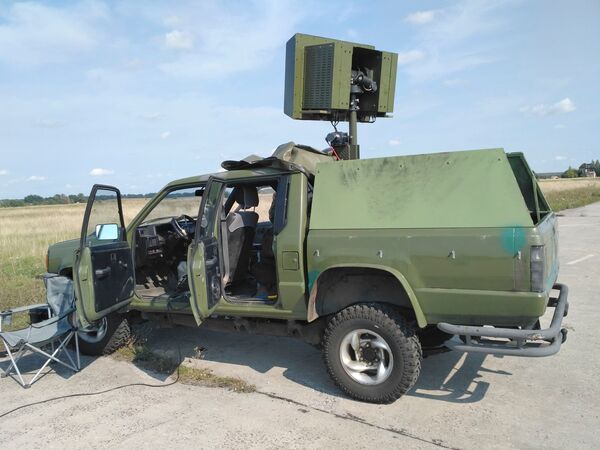 The Bukovel-AD system is intended to be used primarily as a counter-UAV system. (Mikhail Zhirohov)

The Ukrainian armed forces have acquired and fielded a range of electronic warfare (EW) systems in recent years, with a mix of new equipment and improved legacy systems.

Most of the development has taken place since Russia annexed Crimea in 2014, and was driven by its support for the breakaway regions of Donetsk and Luhansk, which has seen Russian forces employ a range of EW assets.

Counter-unmanned aerial vehicle (C-UAV), direction finding, communications jamming, and precision-guided weapon jamming capabilities have been developed. Among these is the Bukovel-AD anti-UAV system, which was developed specifically to counter the Orlan-10 UAV that is employed as an EW asset to intercept and jam 3G, 4G, and Global System for Mobile Communications (GSM) cellular communications, as well as to broadcast text messages.

Developed by Proximus – a private Ukrainian company – the Bukovel-AD can detect UAVs operating as far away as 100 km, with an effective range of up to 50 km. On detection of the UAV, the system can employ radio frequency (RF) countermeasures that are designed to interfere with the datalink between the UAV and its ground control station (GCS). It can jam the Global Positioning System (GPS) and Global Navigation Satellite System (GLONASS) control and navigation signals, with a maximum suppression range of 16 km. During the Russian troop buildup ahead of its invasion of Ukraine, the Bukovel-AD was deployed in the Donbas region and tested against the Orlan-10.

The frequent use of UAVs by the Russian-backed rebels in the Donbas was the driver behind the development of the Nota EW system. Nota is designed to provide perimeter protection, detecting and jamming UAVs at a maximum range of 20 km. The system also has the ability to jam cellular communications within 1 km. It is intended to operate predominantly in a silent or stealth mode, and only directs its jamming function upon the detection of a threat.

In addition to its C-UAV role, Nota also provides direction-finding capabilities to detect RF signals – GSM, VHF, LTE, and CDMA – radar emission in the L, S, C, and X frequency bands, and the GPS, GLONASS, and BeiDou satellite systems. At the 2019 Arms & Security Expo, the system's manufacturer, Tritel, introduced a mobile version of Nota that enables the crew to quickly move the system to a new position.

The Mandat-B1E R-330UM radio communication jamming complex is an evolved system. It is designed to gather data on emission sources and then radiate a targeted barrage jamming signal or conduct selective jamming within an area. The system also aids in identifying and locating unit movements and disposition based on radio emissions. Furthermore, it can interfere with fixed or programmable communications frequencies via a frequency-hopping technique.

The ability to jam and interfere with the control and telemetry channels used by precision-guided munitions – and UAVs – is brought by the Anklav system, which is designed to suppress in the 400–2,500 MHz frequency range. It has a stated operating range of up to 40 km using directional antennas, and up to 20 km with omnidirectional antennas.

The Ukrainian armed forces have acquired and fielded a range of electronic warfare (EW) systems in r...