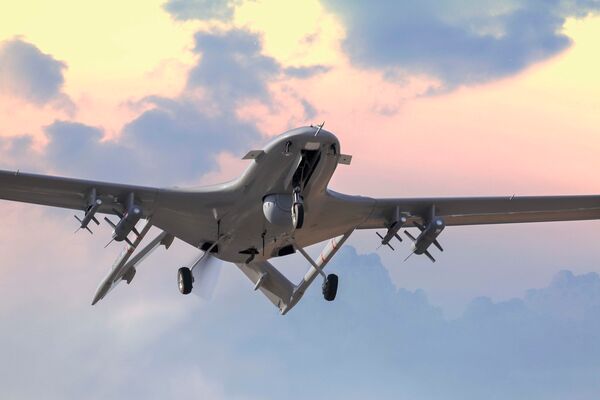 The Turkish-supplied TB2 UCAV is the only armed UAV in the Ukrainian inventory and as such is highly important to the country's continued war effort against Russia. (Baykar)

The Ukrainian defence minister Oleksiy Reznikov said on 2 March that new combat ready TB2s had arrived in the country as part of a wider package of international military assistance.

“The amount of help we are receiving is increasing […]. Ukraine has already [received] and [put] on combat standby new [Bayraktar UCAVs],” Reznikov announced. The minister's statement followed rumours of a delivery of new TB2s from Turkey after a Turkish Air Force Airbus A400M transport aircraft was tracked flying from Ankara to Poland on 1 March.

Prior to the Russian invasion, Ukraine was known to have received six TB2s from Turkey. The minister did not say how many additional TB2s had been delivered.

The TB2 is the only UCAV in Ukrainian service and was first used by the country in October 2021 when a separatist D-30 122 mm howitzer in the breakway Donbass region was targeted and destroyed. Footage released by the Ukrainian government since the launch of offensive Russian operations on 24 February has shown the TB2s to have been heavily engaged in the fighting, destroying several ground vehicles including Buk surface-to-air missile systems.

The TB2 is a medium-altitude, long-endurance (MALE) unmanned aerial vehicle (UAV) that was developed to provide the Turkish Army with a tactical intelligence, surveillance, target acquisition, and reconnaissance capability. According to Janes All the World's Aircraft: Unmanned , it is 6.5 m long and has a 12 m wingspan. With a maximum take-off weight of 630 kg, the air vehicle can carry up to 55 kg in mission system and/or weapons payload. Performance specifications give the Bayraktar TB2 a cruising speed of 70 kt, a range of 150 km, an endurance of 24 hours, and a service ceiling of nearly 30,000 ft.