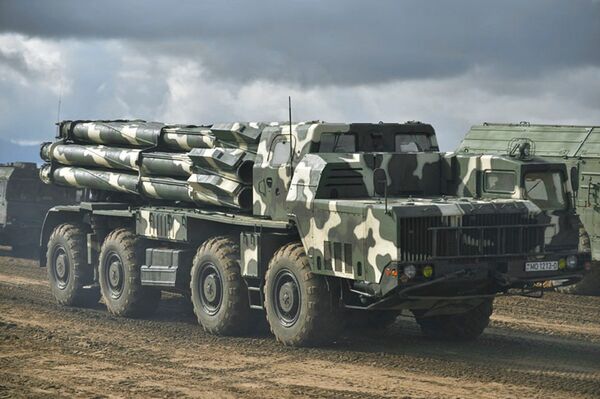 The BM-30 Smerch, recognisable from the distinctive MAZ-530M chassis. The Tornado-S is a deep upgrade to this system. (Russian MoD)

Evidence is emerging from the conflict in Ukraine appearing to show that Russian forces are utilizing guided rockets – the 9M544 and 9M549 – with video and photographs of the remains of these types appearing across social media.

The 9M544 and 9M549 are understood to be the latest guided rockets fired from Russia's Tornado-S system. According to official information, these have a range of 120 km and a circular error probable (CEP) of 5–10 m. Images of rocket fragments with the guidance and control unit code 9B706 have appeared in areas where the 9K515 Tornado-S multiple rocket launch (MRL) system has been active.

The guided rockets have achieved an increase in range and accuracy over earlier types by equipping the nose module with cruciform aerodynamic rudders and integrating the 9B706 control system with on-board radio-electronic equipment.The 9B706 uses the CH398M strapdown inertial navigation system (SINS), which receives data from angular velocity and linear acceleration sensors. This, along with the GLONASS modules (also integrated into the 9B706 control system unit), provides a real-time data feed to generate an optimal quasi ballistic flight path for the 9M544 and 9M549 rockets.

Furthermore, the rocket's apogee is in the upper layers of the stratosphere, thereby reducing drag and supporting the increase in range.

The marked increase in accuracy versus earlier rocket types – for example, 9M55K (HE Frag) and 9M528 (HE Frag - parachute retarded) rockets, which have standard electronic time devices and a CEP of 150 m – is primarily due to the combination of the CH938M SINS and GLONASS.

The Tornado-S is a deep upgrade to the BM-30 Smerch MRL system, which it will eventually replace. The BM-30 is a family of 300 mm MRLs, designed to provide indirect fires in depth and in support of large, combined arms operations. The family is based on a common chassis – a modified MAZ-543M 8×8 cross-country truck – which gives off-road mobility. It is designed for independent operations and can conduct so-called ‘shoot and scoot' tactics.

Externally, the Tornado-S launch vehicle appears almost identical to the baseline BM-30 Smerch 9A52-2, but for a GLONASS receiver mounted on the forward-left portion of the crew compartment. Moreover, beyond this external differentiator, the upgraded mission systems include an automated digital fire control system (FCS), which enables the launcher to be automatically aimed at target co-ordinates received over the battle management system. The crew can also undertake the fires mission from within the truck cabin, instead of from the post located on the rear-left of the launcher. The external post remains however, and this is thought to be as a manual back-up in case of emergency.

Russia deploys the Tornado-S system, or complex, in brigades of four battalions. A battalion consists of three batteries with four launchers in each. Accompanying each launcher is a 9T234-2 trans loader vehicle based on the MAZ-543A 8×8 chassis, and this carries 12 rounds and is equipped with a crane.

Apart from the 12 launchers, the Tornado-S battalion includes the battalion and battery 1K 123 Vivary FCS and command-and-control (C2) units, which are housed in a K4310 fully enclosed box unit mounted on a KamAZ-4310 6 × 6 truck chassis. Each of these has its own power generator and a secure data and radio communications system that will support VHF communications to a range of 50 km and HF communications to a range of 350 km. The elements of the Vivary FCS can undertake automated or non-automated command-and-control of a Smerch-equipped MRL brigade.

The Command and Staff Vehicle (CSV) used by the brigade commander and brigade staff is also based on the KamAZ-4310 6×6. For the conflict in Ukraine, this vehicle may have been replaced by the MP32M1 unified C2 system, which is based on the KamAZ-43114 three-axle truck chassis equipped with the K4.5350 shelter. All brigade-level CSVs feature GLONASS/NAVSTAR receivers, other elements in the complex include the 1B44 meteorological station on an unarmoured ZIL-131 6×6 chassis, PM-2-70 MTO-V maintenance and repair unit also fitted to the ZIL-131, and the IT12M-2M topography vehicle which uses a GAZ-66 4×4 truck chassis.

A lighter version of the Tornado-S launcher vehicle, the 9A52-4 (6 round) MRL, is a slim-line version of the original 9A52 and 9A52-2. With six launcher tubes instead of 12, it is fitted on a Kamaz-63501 four-axle 8×8 truck chassis and is designed to be air transportable and operated by a reduced crew. This version is understood to be under development and while many media outlets are referring to the Tornado-S deployed in Ukraine as the 9A52-4, there is not yet evidence of this variant having been deployed.

In addition to the guided rockets, the Tornado-S can fire 9M55K rockets that carry 73 HE frag 9N235 or 9N210 bomblets, the anti-armour parachute retarded MOTIV-3F top attack 9M55K1 rocket, the anti-tank mine laying 9M55K4, the thermobaric fuel air explosive 9M55S, and the 9M55K7, which has a high-explosive anti-tank warhead, among others. These rockets also have extended range versions that enable them to engage targets at a range of 90 km.

Evidence is emerging from the conflict in Ukraine appearing to show that Russian forces are utilizin...