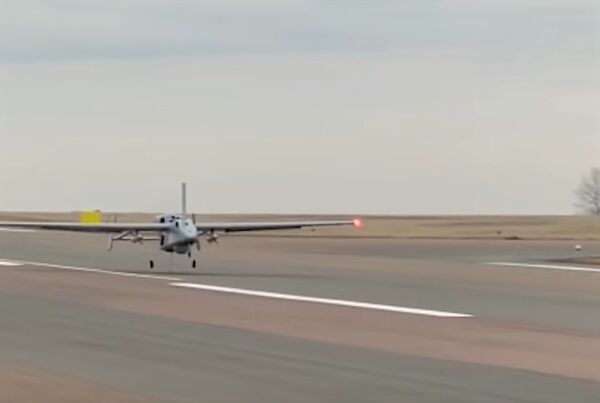 A screenshot from a Russian MoD video showing the Forpost-R UCAV departing for a mission over Ukraine. (Ministry of Defence of the Russian Federation)

Russian forces in Ukraine have been seen fielding the Forpost-R unmanned combat aerial vehicle (UCAV) for the first time.

A video released by the Ministry of Defence (MoD) of the Russian Federation on 13 March showed an armed Forpost-R taking off from an unidentified prepared airstrip, before the footage cut to a Ukrainian multiple launch rocket system (MLRS) being destroyed by the UCAV.

The Forpost-R is an improved and indigenised model variant of the Forpost (Outpost), which is the Israeli Searcher Mk II UAV assembled by the Yekaterinburg-based Ural Civil Aviation Plant (Ural‘skiy Zavod Grazhdanskoy Aviatsii: UZGA) since 2011 under licence using components manufactured by Israel Aerospace Industries (IAI). As the relations between the West and Russia soured, in 2016 Israel bowed to US pressure and informed Russia that no further component deliveries will take place. This event spurred the MoD to embark on the Forpost indigenisation programme. Apart from indigenisation, development of an attack Forpost iteration also became an objective of the endeavour. Up to that point, Forpost was used for surveillance, reconnaissance, target acquisition and designation, artillery-fire adjustment, damage assessment, and mission overwatch.

In January 2017 the Russian Defence Minister, Sergei Shoigu, was informed by the UZGA head that an indigenised and improved model variant of Forpost would be ready for delivery in 2019. Subsequently, in August 2019, the MoD released a video of a UAV designated as the Forpost-R. The MoD also stated that the testing phase of the Forpost-R has been successfully completed and that the UAV is to enter service in 2020. In addition, the MoD revealed that the new UAV is fitted with the Russian-made APD-85 piston engine, electro-optics, electronics, datalink system, and that it runs on domestic software. The Forpost-R also features a reinforced fuselage for increased survivability. The UAV has reported maximum endurance of 18 hours and take-off weight of 500 kg, with a nearly 20,000 ft service ceiling, and a maximum range of around 400 km.

In February 2020 the MoD and UZGA signed a contract for 10 new Forpost-R UCAVs, thought to comprise three UCAVs each, for delivery by 2023.

During the Army-2021 defence exhibition held in Kubinka, Russia, in August 2021, a Forpost-R was on display, armed with two 9M133-family anti-tank guided missiles (ATGMs) of the 9K135 Kornet system. In September, during the strategic level quadrennial Zapad-2021 exercise, a Forpost-R armed with two KAB-20-family guided bombs, one under each wing, was observed in use. The Forpost-R featured in the MoD video mentioned at the beginning of the article appears to be armed with the same bomb family.

The ‘KAB' part of the designation is an acronym of Korrektiruemaya Aviatsionnaya Bomba or literally ‘corrected aerial bomb' in English, while the number ‘20' denotes the approximate weight of the ordnance in kilograms. The KAB-20-family has been developed by the Central Scientific Research Institute of Chemistry and Mechanics named after Dmitri Mendeleev in Moscow within the R&D framework named ‘Balistika-2'. The family is thought to comprise model variants with different guidance systems such as laser and satellite positioning, thought to be designated as KAB-20L and KAB-20S respectively, and with different warhead options: demolition, thermobaric, and penetration.

Apart from the 9M133 and KAB-20 family, the attack iteration of Forpost-R can also be armed with various free-fall general-purpose ‘dumb' bombs. The UAV is reportedly able to carry a maximum payload of 120 kg.