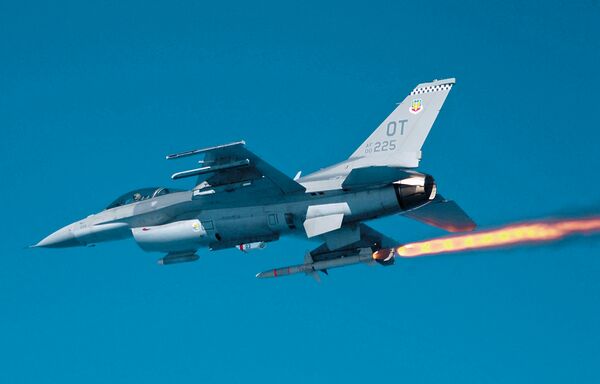 A US Air Force F-16CM fires an AGM-88 HARM during trials. Kyiv has restated its interest in acquiring the F-16, having recently received an undisclosed type and number of air-launched anti-radiation missiles for the suppression or destruction of enemy air defences. (US Air Force)

Ukraine restated its interest in receiving Lockheed Martin F-16 Fighting Falcon jets to bolster its depleted combat aviation forces at the same time as the United States confirmed delivery of air-launched anti-radiation missiles to the country.

The Ukrainian Ministry of Defence (MoD) tweeted an artist's rendering of F-16s in national livery and markings to coincide with Ukrainian Air Force Day on 7 August. “Ukrainian Fighting Falcons strike back,” the post stated. The release of the imagery coincided with imagery released from Russian sources of what purported to be parts from either an AGM-88 High-speed Anti-Radiation Missile (HARM) or AGM-88E Advanced Anti-Radiation Guided Missile (AARGM) that had been fired at its positions.

The combination of the F-16 imagery and the HARM/AARGM parts prompted speculation that Ukraine had already received and was operating the Western combat aircraft. This speculation was based largely on the fact that the US already operates the F-16CM Block 50 in the Suppression of Enemy Air Defences (SEAD) or Destruction of Enemy Air Defences (DEAD) role, and that the MiG-29 ‘Fulcrum', Sukhoi Su-27 ‘Flanker', Su-24 ‘Fencer', Su-25 ‘Frogfoot', and Aero L-39 Albatros types flown by the Ukrainian Air Force were not believed to be compatible with Western anti-radiation weapon types.