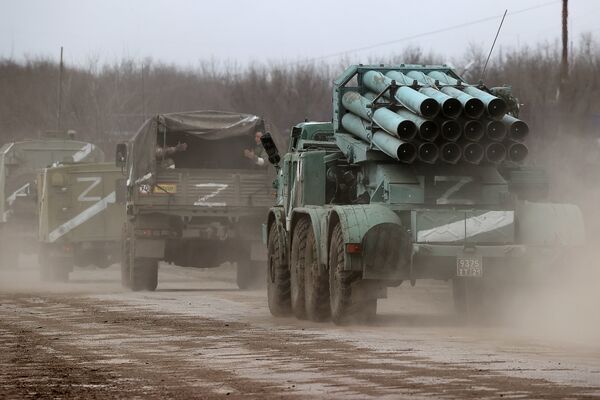 A column of Russian military vehicles leaves the town of Armyansk, northern Crimea, on 24 February. Spray-painted markings have been widely observed on vehicles. (Sergei Malgavko/TASS)

The Russian and Ukrainian militaries engaged in the conflict in Ukraine have several difficulties to overcome around force recognition and tracking, and the so-called ‘fog of war' may hang heavy.

Unverified reports state that the Russian Navy shot down a Russian aircraft over the Black Sea. Given the use of identification friend-or-foe (IFF) transponders, it should be a relatively straightforward task to avoid such incidents. In the land domain, differentiating between friend-or-foe is a significantly more demanding task.

Much of the materiel fielded by the belligerents is of the same type or has a common design lineage. Save for country-specific modifications and markings, it can be challenging to tell the equipment apart, especially at the ranges that engagements with modern weapon systems often take place.

Video footage and imagery emerging from Ukraine has shown attempts to simplify recognition, both on soldiers and vehicles, such as spray-painted markings on Russian vehicles and simple fluorescent armbands worn by Ukrainian forces.

In addition to these rudimentary efforts, however, discipline in following established tactics, techniques, and procedures (TTPs) may play a significant role in limiting incidents of fratricide. For example, armoured vehicles manoeuvring near the front lines are likely to keep barrels pointed in the direction of threat in order to signal their intentions. At the tactical level, units will have their own standard operating procedures for marking their positions, particularly of lead troops and the extreme flanks.

While there is no fool-proof means of differentiating a friend from a foe, the use of command-and-control (C2) systems that deliver force tracking, situational awareness, and other capabilities can bring significant benefits, both in limiting ‘friendly fire' incidents and enhancing combat effectiveness.

The extent to which C2 systems have been fielded with Ukrainian forces and their effectiveness cannot be ascertained yet. Forces have reportedly been equipped with an indigenous C2 capability that was developed by UA Defense. The Hermes-C2 system utilises a map-based display on a tablet computer with a touchscreen interface. It is intended to deliver situational awareness (SA)and features red and blue force tracking capabilities, a range of battle management tools – such as route planning and the ability to exchange sensor and other data – and chat communications.

The system has been observed in use during large-scale exercises in 2020, where it was integrated on armoured vehicles and networked with an unmanned aerial vehicle (UAV) and artillery elements. Target co-ordinates were passed from the UAV to the Hermes-C2 system and onwards to the artillery fire-control system, where the ballistic calculations were made.

At the tactical level, a number of C2 systems have been developed for the Russian military. The Strelets system forms part of the wider Ratnik soldier system. Two versions of the system have been identified: one for use by commanders that features a digital map interface on a touchscreen personal digital assistant (PDA), which displays force tracking data among other information; the other is intended for infantry personnel with a digital compass instead of the map. The C2 functions include tactical chat and the ability to network with different levels of command and other components, sharing a range of data, such as targeting information and imagery. It is unclear how widely systems have been fielded under the Ratnik programme.

The UNKV-E system has also been developed for dismounted applications, with three devices – individual soldier, platoon commander, and company commander – linked by VHF and wireless communications, all have GPS/GLONASS. The individual soldier version is a handheld device that is limited to text and voice communications. The platoon commander device is also handheld with a small screen for situational awareness, while the company commander has a ruggedised tablet.

Also at the tactical level, the ASUV TZ command system is intended for use from the platoon level upwards. It includes a digital mapping system that can display the tactical picture and a range of battle management functions. In its armoured fighting vehicle configuration, the ASUV TZ has been identified as fitted on BTR-80 and -90, BMP-2 and -3, and MT-LBU vehicles.

The C2 systems in service in Ukraine will be operating in demanding conditions. Ukraine and Russia are known to be equipped with advanced electronic warfare (EW) systems that can jam GPS and both radio frequency (RF) and satellite communications, which are essential for C2 systems to operate effectively. Through these jamming systems, both militaries can potentially create a so-called C2 denied or degraded environment (C2D2E). Furthermore, any fighting in built-up areas can significantly impact the efficacy of C2 systems, especially when operating with older radios or relying on satellite communications alone.

While robustness can be built into systems to ensure that they offer the most basic force tracking and other C2 functions in difficult conditions – such as through smart management of bandwidth and using high frequency (HF) communications, which offers more resilience against jamming – it is likely that much of the C2 on the ground will be achieved via voice communications. Whether that be via radio, satcom, or cellular phone, indeed for as long as cellular networks are available the latter may prove to offer an effective – if rudimentary – form of force tracking and text ‘chat' through built-in commercial features and apps.

The Russian and Ukrainian militaries engaged in the conflict in Ukraine have several difficulties to...