The UK Ministry of Defence (MoD) has sold its Britten-Norman Defender AL2 (Defender 4000: D4K) surveillance and utility aircraft back to the manufacturer, after recently retiring them from service. 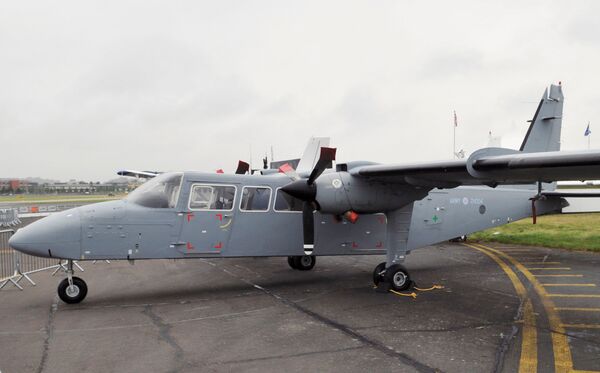 One of nine Defender aircraft that the MoD has sold back to Britten-Norman following the type's recent retirement from operational service. (Janes/Patrick Allen)

Britten-Norman announced its purchase of the BN2T-4S Islander aircraft, as they are known in civil use, saying that they will undergo a major refurbishment ahead of being returned to the civil aircraft register for onward export sale.

The MoD had nine Defender aircraft in its inventory, with the type flown by Army Air Corps crews under Royal Air Force (RAF) control. It was reported that the MoD retired these and three Islander AL1 and three Islander CC2 platforms in June, though the ministry did not respond to a Janes request at the time for confirmation.

The Islander had been in UK service since 1989, with the Defender joining in 2004. Both types were equipped with sensors that included a Wescam MX-15 electro-optical/infrared camera, while they could also be used to ferry special forces troops.

According to Britten-Norman, the BN2T-4S variant of the Islander that it has bought back is a derivative of the standard turboprop aircraft, with an extended fuselage for more ergonomic staggered seating, and its larger wing accommodates up to 330 US gallons (1,249 litres) of fuel giving the aircraft an endurance of up to eight hours and a visual flight rules (VFR) range of more than 1,000 n miles (1,852 km). The aircraft's uprated Rolls-Royce Model 250 B17F twin engines are operated at 400 SHP, affording the aircraft a 8,500 lb (3,855 kg) maximum take-off weight.