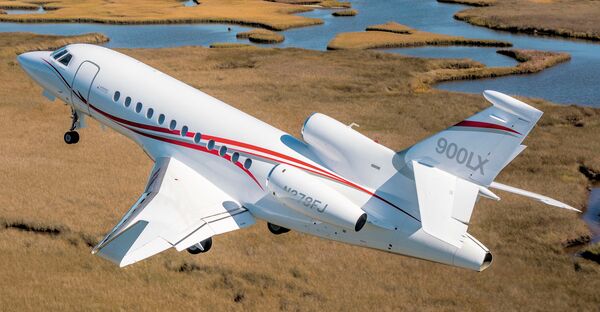 The Dassault Falcon 900LX will replace the now-retired BAe 146 in the VVIP role for the UK. (Dassault)

The United Kingdom has selected the Dassault Falcon to replace the recently retired BAe 146 aircraft operated by the Royal Flight of the Royal Air Force (RAF).

“The contract with Centreline, placed by Defence Equipment and Support (DE&S) – the MoD's procurement arm – includes the purchase of two Dassault 900LX aircraft and two years of initial support, plus three option years if required,” the ministry said, adding, “[The] Dassault 900LX was successful in this competition as the standout candidate in performance, cost value, and time requirements”.

As noted by the MoD, the aircraft will be initially operated by a mixed crew of civilian and RAF personnel, and will be upgraded with missile jamming systems and military communications to deliver the full capability when crewed by RAF personnel.

Based at RAF Northolt in north London, 32 Squadron (The Royal) previously operated two BAe 146 C2s in the fixed-wing VVIP role (with two more BAe 146 C3s configured for tactical transport duties), until the type was retired in March 2021.

The Command Support Air Transport Recapitalisation (CSAT RECAP) project under which the Falcon 900LXs are being acquired aims to replace the BAe 146 capability by adopting a procurement strategy featuring two phases.

The United Kingdom has selected the Dassault Falcon to replace the recently retired BAe 146 aircraft...