A UK C-17 Globemaster transport has for the first time trained to operate from austere airstrips as part of a drive to expand the operational envelope of the eight Royal Air Force (RAF) aircraft of the type. 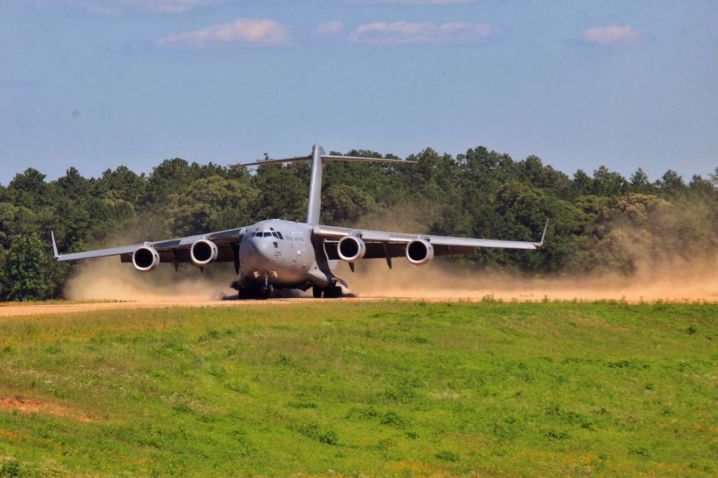 An RAF C-17 practised landing and taking off from the Fort Polk training facility in Louisiana on 26 December 2020. (Crown Copyright)

The aircraft from 99 Squadron carried out a series of landings on and take offs from a dirt strip in the United States to give crews experience operating in this new environment, RAF Brize Norton, the home base of the UK’s C-17 fleet, reported on the RAF website on 8 January. RAF sources told Janes on 13 January the exercise took place at the Geronimo landing zone at the Joint Readiness Training Center at Fort Polk, Louisiana, on 26 December 2020.

The RAF has operated the C-17 since 2001 but until the recent training in the US the service has always operated them to move outsized cargo into established airfields with paved runways. The semi-prepared runway operations (SPRO) exercise is designed to allow the RAF C-17 fleet to operate in a wider array of tactical scenarios from airstrips constructed from non-permanent materials, such as gravel, dirt or even packed ice and snow, according to RAF Brize Norton.

“Developing a UK C-17 SPRO capability allows the RAF to exploit the existing capability of the C-17, opening up a new area of operation for defence now and for the future,” RAF Brize Norton said. “The strategic effect that this capability provides gives the UK flexibility to provide a rapid military response where it is needed in conflict or during humanitarian aid operations anywhere in the world.”

A UK C-17 Globemaster transport has for the first time trained to operate from austere airstrips as ...