The UK's Defence Science and Technology Laboratory (Dstl) is leading a programme, referred to as the Light Fires Platform (LFP), to study a potential replacement for the towed 105 mm L118 Light Gun.

The LFP effort is at a pre-concept phase that is now in its second year and is due to be completed in 2022, according to Ricky Hart, principal advisor for Land Weapons and Land Fires at Dstl. 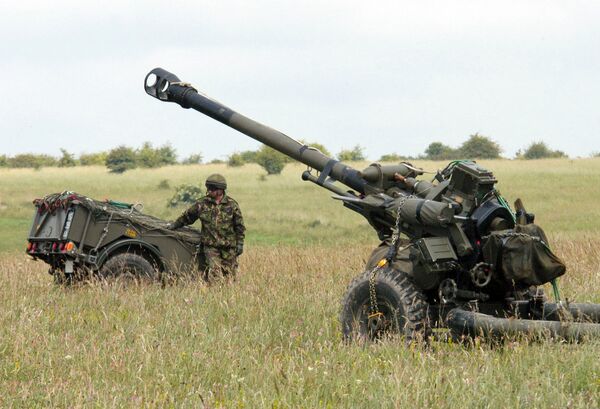 An L118 Light Gun waiting to be airlifted by an RAF Chinook. (Janes/Patrick Allen)

Hart said unmanned, autonomous, and self-propelled concepts are being considered for technology development.

Potential options could include a more mobile 105 mm weapon, 120 mm mortar, or a 5 inch (127 mm) naval weapon. An artist's impression, released by Dstl as an example, showed a mobile 4×4 platform armed with a 105 mm weapon.

Under the latest British Army reorganisation, two Heavy Brigade Combat Teams (HBCT) will be equipped with an artillery system selected for the upcoming Mobile Fires Platform (MFP), which will be a 155 mm/52 calibre system that could be tracked or wheeled.