The United Kingdom has launched its latest performance enhancement package for the Eurofighter Typhoon combat aircraft, with a GBP135 million (USD188 million) contract announced on 6 August. 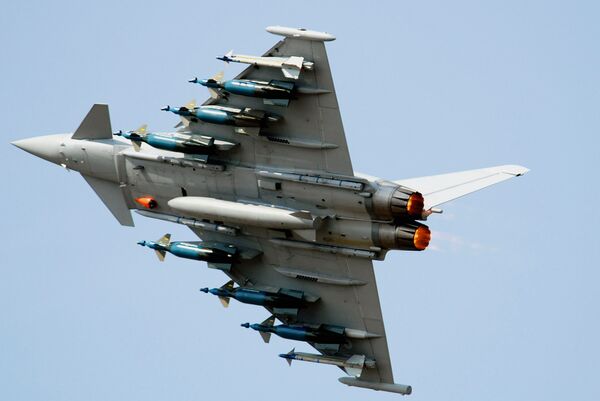 The P3Ec upgrade will enhance the Typhoon's weapons, defensive aids, and data capabilities. Set to include the large area display, the package should be ready by the end of 2024. (Janes/Patrick Allen)

The Performance 3 Enhancement c (P3Ec) package announced by BAE Systems is geared at improving the aircraft's weapons, defensive systems, and datalink capabilities, and is due to be delivered by the end of 2024.

As noted by the company, P3Ec is part of a wider EUR300 million (USD354.3 million) investment by the aircraft's core and export customers, and includes enhancements to the Typhoon's capability when operating the MBDA Meteor beyond visual-range air-to-air missile and the MBDA Brimstone precision air-to-surface missile, the MIDS Link 16 datalink and radio, as well as the defensive aids sub-system (DASS).

In order to help the pilot process the additional information that P3Ec will provide, a large-area display (LAD) developed by BAE Systems is included in the upgrade. The LAD will replace the Typhoon's current three-multifunction display (MFD) cockpit configuration with a single unit that should massively aid with the sensor fusion required for the new datalinks, as well as for the Radar 2 active electronically scanned array (AESA) sensor being integrated onto the UK's aircraft. Although not mentioned in its contract announcement, the LAD would likely be augmented by BAE Systems' HUDLite and/or Striker II helmet-mounted display (HMD) system.

The United Kingdom has launched its latest performance enhancement package for the Eurofighter Typho...