The United Kingdom is to deploy the Lockheed Martin F-35B Lightning II Joint Strike Fighter against the Islamic State in Iraq and Syria when the HMS Queen Elizabeth aircraft carrier sails into the eastern Mediterranean later in May. 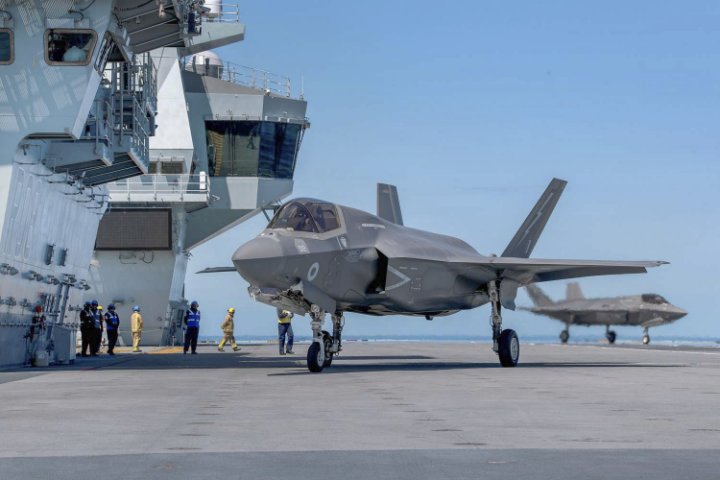 UK F-35Bs will strike Islamic State targets in Syria and Iraq as part of HMS Queen Elizabeth’s inaugural operational cruise that is set to begin in the coming weeks. (Crown Copyright)

The Ministry of Defence (MoD) announced on 3 May that F-35Bs from Carrier Strike Group 2021 (CSG21) will provide a “tangible and impactful support to counter [Islamic State] operations in Iraq and Syria”.

The CSG21 is set to sail from the UK to the Far East towards the end of May. Eight F-35Bs from the Royal Air Force’s (RAF’s) 617 Squadron ‘Dambusters’ and 10 F-35Bs from Marine Fighter Attack Squadron (VMFA) 211 ‘The Wake Island Avengers’ have begun arriving on the ship for exercises ahead of the carrier’s inaugural operational cruise.

According to the MoD press release, only aircraft from 617 Sqn will be used on Operation ‘Shader’ for counter-Islamic State combat operations over Iraq and Syria. “The F-35B Lightning jets, which will operate from HMS Queen Elizabeth throughout the deployment, will make a significant contribution in degrading [the Islamic State],” the MoD said.

The United Kingdom is to deploy the Lockheed Martin F-35B Lightning II Joint Strike Fighter against ...