The United Kingdom has concluded its ‘Many Drones Make Light Work’ programme, with the Defence Science and Technology Laboratory (Dstl) announcing on 28 January a large scale demonstration of the swarming unmanned aerial vehicle (UAV) competition. 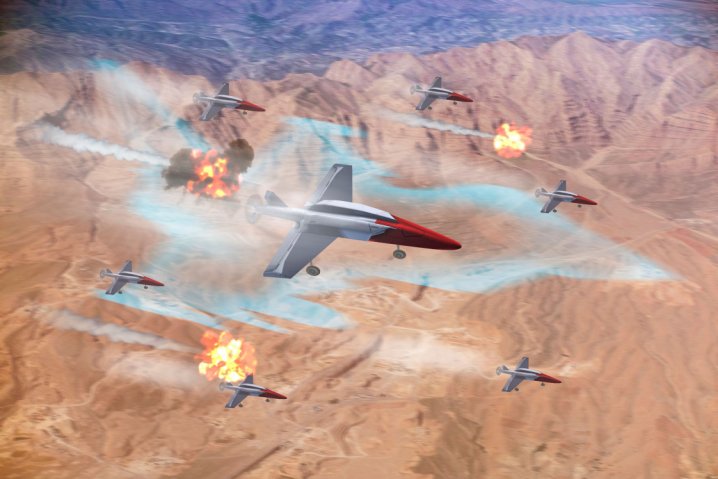 An artist’s impression of how a drone swarm might enable the UK to add mass to its capable but numerically inferior manned combat aviation capabilities. (Leonardo)

Held earlier in January, the exercise was the culmination of the Dstl’s ‘Many Drones Make Light Work’ competition that was funded under the Ministry of Defence’s (MoD’s) Science and Technology portfolio through the Defence and Security Accelerator (DASA).

Following two earlier phases, the third and final phase of the effort was announced in 2019. It involved the Ministry of Defence’s (MoD) Defence and Security Accelerator (DASA) awarding GBP2.5 million (USD3.4 million) to a consortium led by Blue Bear Systems Research, that also included Plextek DTS, IQHQ, Airbus and Durham University. This contract was to demonstrate the networked operation of a swarm of 20 ‘drones’ for applications that include situational awareness, medical assistance, logistics resupply, explosive ordinance detection and disposal, as well as confusion and deception.

As noted by Dstl, the two week demonstration saw more than 220 sorties flown.

The United Kingdom has concluded its ‘Many Drones Make Light Work’ programme, with the Defence Scien...