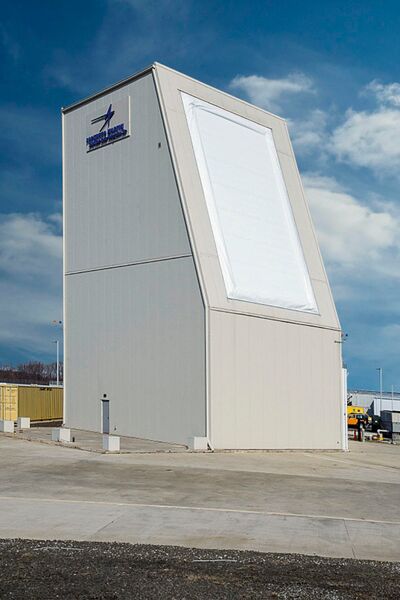 The Long Range Discrimination Radar seen in testing at Lockheed Martin's facilities in the US. The UK is set to acquire this system under a State Department approval for a ballistic missile defence radar announced on 17 March. (Lockheed Martin)

The United Kingdom is to buy a ballistic missile defence radar (BMDR) and command and control battle management and communications (C2BMC) system from the United States.

The US State Department approval for the Foreign Military Sales (FMS) procurement, announced 17 March, covered one BMDR and two C2BMC systems for an estimated USD700 million.

“The proposed sale will improve UK's ability to meet current and future ballistic missile threats to the UK and NATO by improving the effectiveness of NATO BMD systems,” the US Defense Security Cooperation Agency (DSCA) said.

Although the approval did not disclose the BMDR system approved for the UK, the disclosure that Lockheed Martin is to be the principal contractor indicates it will be the Long Range Discrimination Radar (LRDR), as used for the US Missile Defense Agency's layered defence strategy to protect the US homeland from ballistic missile attack.

As noted by Lockheed Martin in its promotional material for the product, the solid state gallium nitride (GaN)-based LRDR is built upon the US government's long-term investment in S-Band radar, ground-based radar, and systems integration, as evident in such Lockheed Martin technologies as the Aegis Combat System, Space Fence and Aegis Ashore.

The United Kingdom is to buy a ballistic missile defence radar (BMDR) and command and control battle...