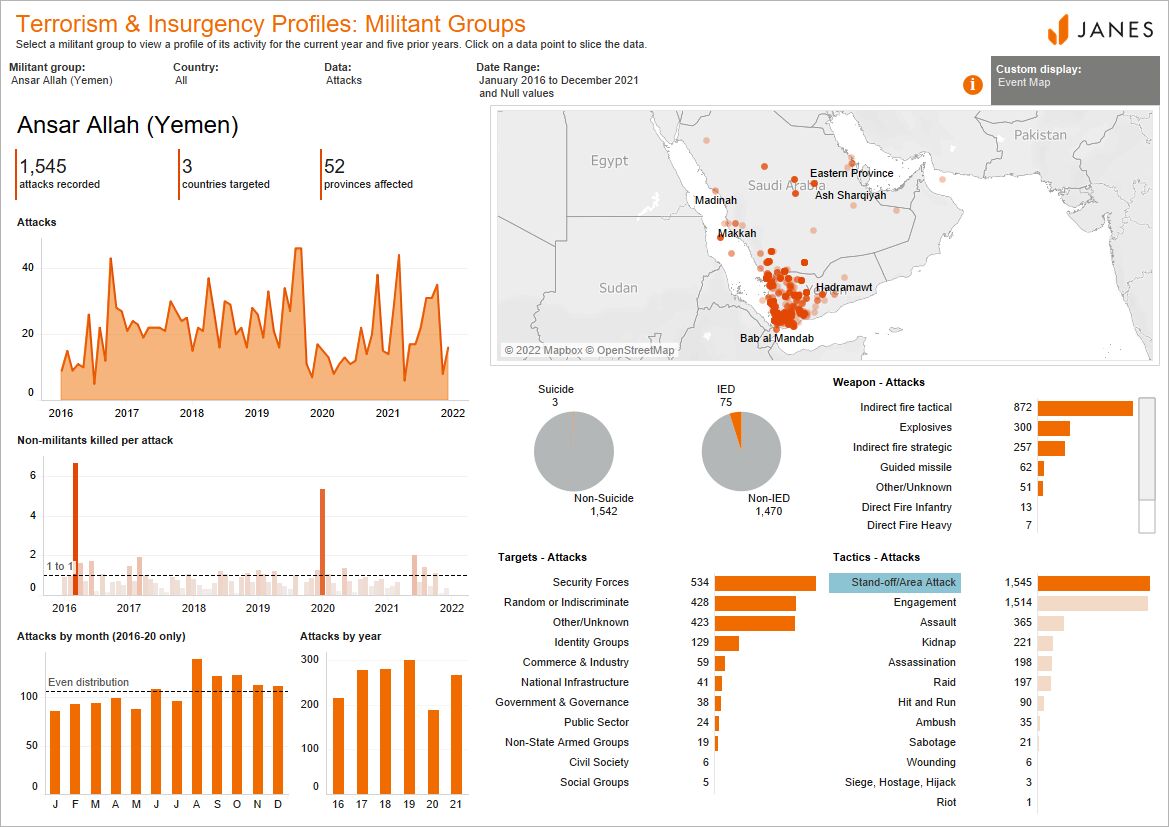 This dashboard shows stand-off/area attacks – including the use of unmanned aerial vehicles (UAVs) and ballistic missiles – conducted by Ansar Allah militants between January 2016 and December 2021. (Janes 2022

On 17 January, three civilians – one Pakistani national and two Indian nationals – were killed and six others were wounded when an unspecified number of missiles and unmanned aerial vehicles (UAVs), launched by Yemeni non-state armed group Ansar Allah, targeted three oil storage tanks at the Abu Dhabi Oil Refining Company (ADNOC) in the Musaffah industrial area and at Abu Dhabi International Airport in the United Arab Emirates (UAE). Citing Abu Dhabi Police, the official Emirates News Agency (WAM) reported that day that a fire had broken out at ADNOC, which led to the explosion of three oil tanks, and that there was a “small fire” at the airport. ADNOC released a statement that day confirming the death of three of its employees.

Ansar Allah, more commonly known as the Houthis, claimed responsibility for the attack on the same day in a statement by the group's military spokesperson – Yahya Saree – broadcast on its Al-Masirah TV outlet. Saree claimed that the group's “Yemen Cyclone” operation had targeted Abu Dhabi International Airport, Dubai International Airport, the Mussafah oil refinery, and other unspecified vital installations with five ballistic missiles and a “large number” of UAVs. Saree specified that “Quds-2 winged missiles” had targeted the oil refinery, while “Samad-3” UAVs had targeted Abu Dhabi airport and a “Zolfaghar ballistic missile” had targeted Dubai airport.

Saree also warned that the Saudi-led coalition – of which the UAE is a member – supporting the government in Yemen fighting Ansar Allah, would be targeted in further “painful strikes”. He labelled the UAE an “unsafe statelet”, warning citizens, foreign companies, and expatriates living therein to avoid vital installations that may be targeted by the group. At the time of writing, the weapons reportedly used by Ansar Allah in the attacks could not be independently verified. Similarly, Emirati authorities have not reported an attack on Dubai airport.

Nevertheless, the group has continually employed UAVs and ballistic missiles in cross-border attacks targeting Saudi economic interests and infrastructure. Indeed, on the same day as the UAE attacks, the official Saudi news outlet Saudi Press Agency (SPA) reported that the militants had also attempted to target Saudi Arabia's southern region with three UAVs, which were intercepted, launched from Sanaa International Airport in the Ansar Allah-controlled capital.

The attacks targeting the oil tanks and Abu Dhabi airport mark the first such attack in the UAE by Ansar Allah recorded by Janes since August 2018. The minimal number of attacks against Emirati domestic targets prior to this date is highly likely due to a conscious decision by Ansar Allah not to target the state, given the UAE's introduction of a military drawdown from Yemen in July 2019, followed by the completion of a phased military withdrawal in February 2020.

Indeed, although Ansar Allah does not typically target the UAE, the targeting of economic assets and key infrastructure with UAVs and ballistic missiles is consistent with the group's modus operandi and growing capabilities. In August 2021, Janes assessed that Ansar Allah demonstrated increasing capability to target domestic Saudi economic interests and key infrastructure, particularly within the energy and maritime sectors, as well as in the Red Sea, as demonstrated by its increasing attacks on such targets. However, the majority (66.1%) of Ansar Allah stand-off/area attacks, involving the use of UAVs and ballistic missiles, have been disrupted or intercepted by Saudi-led coalition forces since 2018, as recorded from open sources by Janes . These attacks also typically do not inflict a notable number of casualties.

The 17 January attacks in the UAE are therefore significant given the number of resultant non-militant fatalities and demonstrate the renewed intent of Ansar Allah to target the state. This escalation in the targeting of Emirati assets by Ansar Allah comes amid 10 January reports of the group's loss of control of Shabwa governorate to the pro-government ‘Giants Brigades' militia, and as such the attacks can be interpreted as an attempt to demonstrate continuing strength and capability to strike at vital economic infrastructure.

Furthermore, similar attacks targeting energy assets and key infrastructure in the UAE are likely in the coming three-to-six-month period, particularly if the UAE acts to re-engage in the conflict against Ansar Allah. Indeed, the Saudi-led coalition is likely to further intensify its offensive against the group following these attacks, as demonstrated by 18 January airstrikes targeting Sanaa, which killed at least 12 people. Similarly, Ansar Allah's cross-border attacks against Saudi targets are almost certain to persist as the Saudi-led coalition continues its military operations against the militants in Yemen.

On 17 January, three civilians were killed and six others were wounded when an unspecified number of...