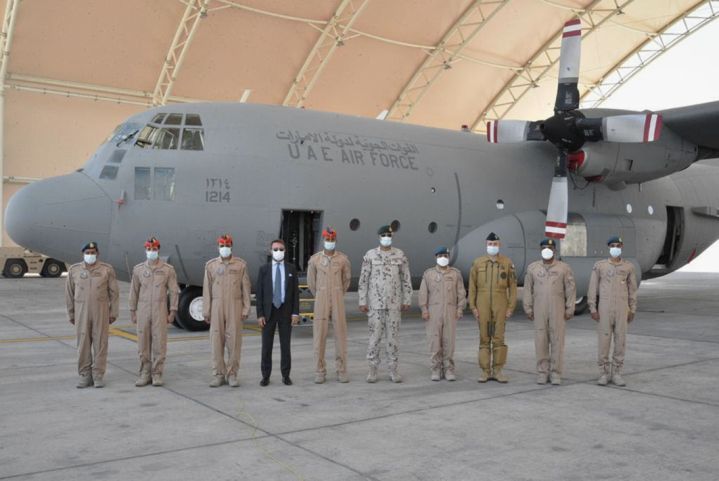 French ambassador Xavier Chatel and Emirati personnel stand next to the C-130 before it departs for its mission in the Sahel. (WAM)

“The Ministry of Defence has announced that it is conducting logistical support flights to support the efforts of the international community, led by France, to combat terrorism in the Sahel region of Africa,” it reported.

“The departure of the first flight from Abu Dhabi took place in the presence of Lieutenant General Saleh Muhammad Saleh al-Ameri, commander of joint operations at the Ministry of Defence, and Xavier Chatel, French ambassador to the UAE,” WAM added in a report illustrated by a photograph showing the officials standing next to an Emirati C-130.

The French embassy in the UAE tweeted the same photograph on the following day thanking the UAE for providing air logistics links between France and the Sahel to support its Operation ‘Barkhane’ counter-insurgency mission in the Sahel, which already involves forces from several European countries.

The UAE has become increasingly involved in supporting the G5 Sahel initiative aimed at bolstering the militaries of Burkina Faso, Chad, Mali, Mauritania, and Niger against the jihadist threat in the region. Minister of State for Foreign Affairs Sheikh Shakhbut bin Nahyan participated in the seventh G5 Sahel heads of state conference in Chad’s capital N’Djamena in February and then visited Mali and Niger.

France has pledged to deploy 220 more troops to help suppress the Islamist insurgency in the Sahel, ...

Since 2012, there has been exponential growth in Islamist militancy in the Sahel. Beginning in north...

The Republic of Singapore Air Force (RSAF) has declared its fleet of six Airbus A330-200 Multi-Role ...