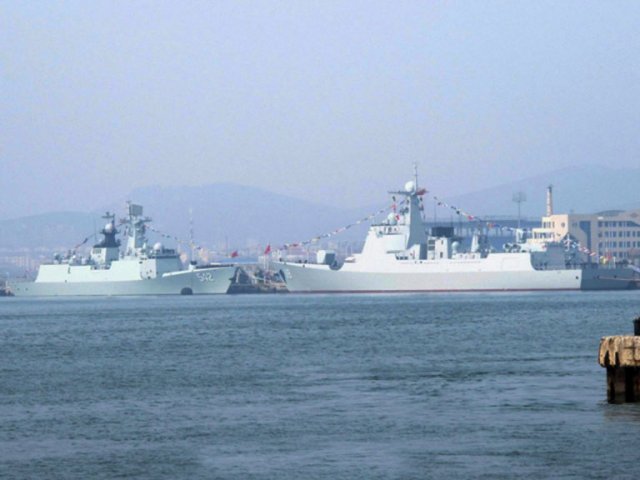 Images recently emerged on Chinese online forums indicating that the PLAN commissioned in late February a Type 052D destroyer (seen here on right hand side with pennant number 119) and a Type 54A frigate (on the left, with pennant number 542). (Via Sina Weibo )

Accompanying comments said the ships were named Guiyang and Zaozhuang, respectively, and state that they entered service with the People’s Liberation Army Navy’s (PLAN’s) North Sea Fleet on 22 February.

The Type 052D destroyers displace over 7,000 tonnes and are 157 m in length. Sixty-four vertical launch tubes, which can fire HHQ-9 surface-to-air missiles and the anti-ship variant of the YJ-18A long-range cruise missile, are installed in two grids: forward and midships.

The lead shipyard for building the Type 052D is Jiangnan Changxingdao, where the first of class was launched in August 2012. However, Guiyang – the eighth Type 052D to be launched overall – was the first to be built by the Dalian Shipbuilding International Company (DSIC). The vessel first entered the water in November 2015, with two further Type 052Ds launched by DSIC in August 2016 and June 2017.

Unconfirmed reports state that the 17th overall Type 052D destroyer was launched at Jiangnan on 23 February, where three more ships of the class are being fitted out post-launch.

The US Coast Guard (USCG) needs to develop a better system to improve the way it conducts surge oper...