At least two examples each of the M-346FA and C-27J as well as one of the A-29B were featured in a 1 August news report released by the Altyn Asyr media network about President Gurbanguly Berdimuhamedow's visit to an airbase in the country's western Balkan Region. 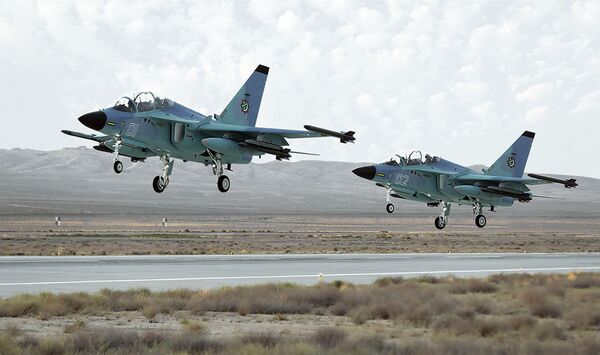 A screengrab from footage released on 1 August by the Altyn Asyr network showing two Leonardo M-346FAs in service with the Turkmen Air Force. Six M-346-series aircraft are reported to have been ordered by Ashgabat in 2019. (Altyn Asyr)

The two M-346FAs, each of which was shown carrying four short-range air-to-air missiles along with external fuel tanks, were seen bearing numbers ‘01' and ‘02', respectively, and performing training flights. This comes after the Italian Senate disclosed in a May 2020 report that Ashgabat had ordered four M-346FAs as well as two M-346FT advanced trainers in 2019 for EUR293.1 million (USD347.7 million). The move was part of a wider package of export licenses authorised for Turkmenistan that year worth a total of EUR446.1 million (USD545 million).

The A-29B Super Tucano was shown in the footage carrying two external fuel tanks. Janes understands that at least two A-29Bs have been delivered to the Turkmen Air Force. In May two aircraft (PT-ZHI and PT-ZHJ), were spotted at the Malta International Airport during their transition flights to Turkmenistan.

Unconfirmed reports claim that country has negotiated the purchase of six Super Tucanos. However, neither Ashgabat nor Embraer has yet to confirm this.