Turkey to train a third of Somali army

Turkey will ultimately train around a third of the Somali National Army (SNA), according to Mehmet Yılmaz, the Turkish ambassador to the East African country. 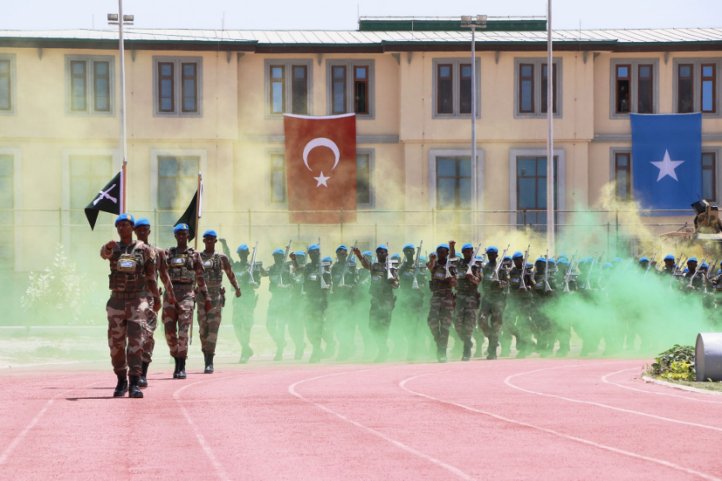 The fourth SNA battalion to be trained by Turkey marches during its graduation ceremony at the Turksom facility in Mogadishu 5 March. (Turkish Armed Forces)

Yılmaz told the state-controlled Anadolu Agency on 4 August that Turkey had pledged to train 5,000 soldiers for the SNA, which is projected to have a force strength of 15,000–16,000.

He said the battalions that have graduated from Turkish training are currently taking part in operations and include officers and non-commissioned officers who are forming the “backbone” of the SNA.

The training of a fifth battalion has continued despite the coronavirus pandemic, albeit with strict precautions, bringing the total number of SNA soldiers trained by the Turks to 2,500, he added.

The recruits receive basic training at the Turksom training centre that Turkey built in Mogadishu and opened in 2017. Yılmaz described the facility, which is also referred to as Anatolia Barracks, as Turkey’s largest military training centre in a foreign country. The trainees are then flown to the İsparta Commando Centre in Turkey to receive another three months of training, he said.

Turkey will ultimately train around a third of the Somali National Army (SNA), according to Mehmet Y...

US troops to withdraw from Somalia

US President Donald Trump has ordered the US military to “reposition the majority of personnel and a...

Turkey and Qatar will help restructure forces loyal to Libya’s Government of National Accord (GNA) i...