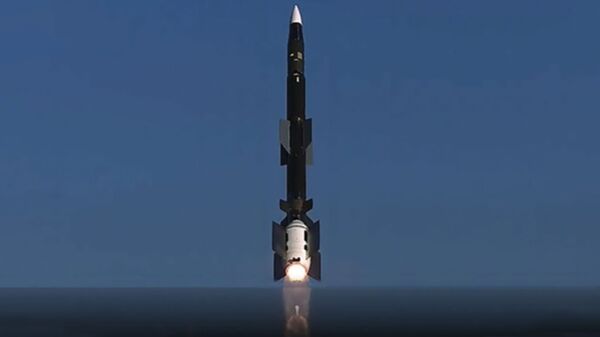 Turkey test fired the Siper air defence system from a test range in the Black Sea province of Sinop. (Roketsan/SSB)

He said, “We have successfully completed another stage in the development of our long-range and multi-layered national air-defence system, the Siper.” Conducted at a test range in the Black Sea province of Sinop, it was the first publicly known launch of a Siper missile.

In a video accompanying the tweet, Demir said the missile is planned to enter Turkey's military inventory in 2023. Testing will continue with launches at increasing ranges and altitudes, he added.

Besides Siper, the Korkut, Sungur and Hisar air-defence systems will form a layered air defence of Turkey. Siper is the longest range in this layered system.

Demir provided details about Siper in an interview with the Daily Sabah on 17 February. Like the Hisar-A+ and Hisar-O+ systems, Siper will have a dual-pulse engine, an active radar seeker, and an imaging infrared seeker.

Siper will provide long-range area air defence of strategic facilities against enemy attacks as part of a distributed architecture, according to an Aselsan fact sheet. Like Patriot and the S-400, Siper will be able to fire more than one type of missile.

The Siper programme is being conducted by Aselsan, Roketsan, and the Defence Industries Research and Development Institute (SAGE) of the Scientific and Technological Research Council of Turkey (TÜBITAK).