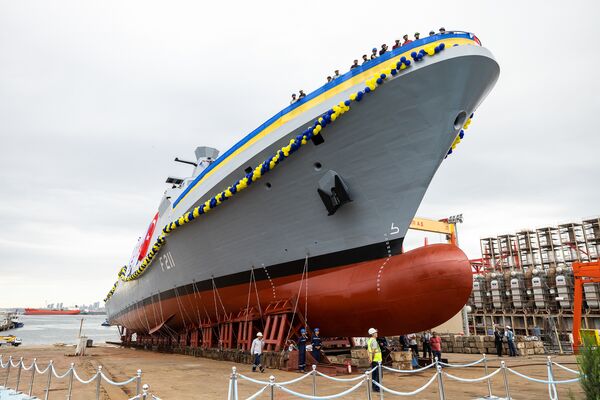 The first Ada-class corvette on order for Ukraine, Hetman Ivan Mazepa, during its launch in Istanbul, Turkey, on 2 October. (Olena Zelenska/President's Office)

The launch ceremony – attended by the First Lady of Ukraine, Olena Zelenska, and Commander of the Ukrainian Navy, Oleksiy Neyizhpapa – was announced on their respective twitter accounts the same day.

Hetman Ivan Mazepa is being built by RMK Marine under an agreement, which was signed by the Ukrainian Ministry of Defence (MoD) and the Turkish Presidency of Defence Industries (SSB) for an initial batch of two corvettes in December 2020. Turkish engineering company STM has overall responsibility for the programme.

Construction on Hetman Ivan Mazepa started in July 2021, and the keel was laid on 7 September the same year

Under original planning, the first corvette was scheduled to be delivered to Ukraine for final outfitting by the end of 2023, however, it is unclear if this timeline has been negatively affected by the conflict with Russia, which began in February 2022.

The ship is based on the four 99 m Ada-class corvettes built for the Turkish Navy that entered service between 2011 and 2019. Turkey is also building four corvettes for Pakistan under a deal signed in 2018, with the first-in-class scheduled for delivery in 2023.