Amid increasing tensions between Beijing and Taipei Taiwan’s President, Tsai Ing-wen, has referred to the growing Chinese military activity near the island as constituting “a threat of force”.

What we are seeing now is not just a situation across the Taiwan Strait, but a regional situation. China's recent military activities, especially in the past few days, clearly constitute a threat of force, which is part of their verbal attacks and military threats [against Taiwan], Tsai was quoted as telling reporters on 20 September.

The president’s remarks came after a total of 37 People’s Liberation Army (PLA) aircraft either violated Taiwan’s southwestern Air Defence Identification Zone (ADIZ) or briefly crossed the ‘median line’ of the Taiwan Strait – the unofficial airspace boundary between mainland China and Taiwan – between 18 and 19 September, according to the Ministry of National Defense (MND) in Taipei. 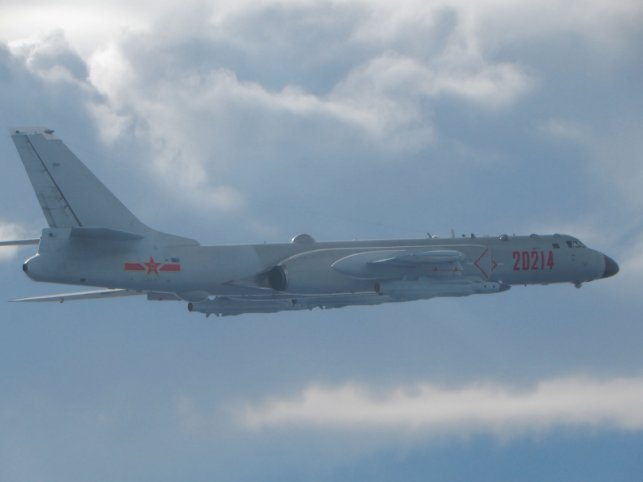 An image provided by the Taiwanese MND showing one of the H-6 strategic bombers that Taipei said violated the island’s southwestern ADIZ on 18 September. (Taiwanese MND)

The aircraft included J-16, J-10, and J-11 multirole fighters as well as H-6 strategic bombers and a KQ-200 anti-submarine warfare (ASW)-capable aircraft, stated the MND, adding that on both days the Republic of China Air Force (RoCAF) scrambled aircraft to intercept the Chinese aircraft after the latter had ignored verbal warnings. It also stated Taiwan’s ground-based air-defence systems had also tracked the PLA aircraft, of which only the fighters crossed the ‘median line’.

Moreover, on 17, 21, and 22 September the MND in Taipei accused KQ-200 aircraft of once again violating the island’s southwestern ADIZ.

Taiwan’s Ministry of National Defense (MND) announced on 12 April that a total of 25 Chinese People’...